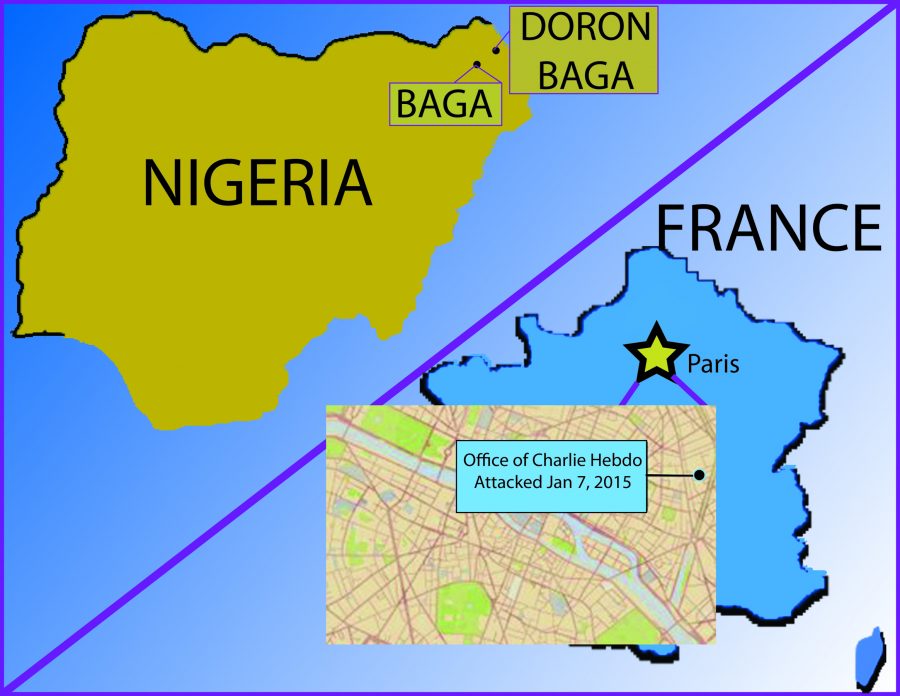 On April 15, 2014, an estimated 270 Nigerian schoolgirls were kidnapped from their dormitories by dozens of armed terrorists, according to the New York Times.

The girls, ages 15 to 18, were forced into the vehicles of the Boko Haram radical Islamist group and taken away.
According to BBC News, the Boko Haram is fighting to overthrow Nigeria’s elected government and create an Islamic state.

Boko Haram can be translated from the region’s Hausa language to mean “western education is forbidden.”

Nine months later the girls have not been recovered. The “Bring Back Our Girls” campaign is no longer in the spotlight, much like the rest of Nigeria’s news.

According to BBC News, The Boko Haram have executed fatal violence in Nigeria since 2009, when the group began their efforts to have Sharia law enforced throughout the entire country, killing hundreds.

On Jan. 3, Boko Haram militants began attacking several towns in Northeast Nigeria. The targeted towns have been seized, though the death toll is unclear.

Some eyewitnesses claim that around 2,000 citizens—men, women, and children—have died. However, the Nigerian government numbers the dead at 150.

According to CNN, the Nigerian government is conducting an official headcount of households to establish a concrete number. It has not yet been completed.

It has also been reported by NBC News that children, specifically young females, have been used as suicide bombers by the Boko Haram.

Mgbah “Nana” Onyinyechi, an international student from Abuja, Nigeria, is saddened that her country still has to suffer under the hands of Boko Haram.

“It has become a situation in which you have to save yourself and your family. People are having to move around the country just to keep themselves and their family safe,” said Onyinyechi, a junior psychology major.

On Jan. 7, 12 people were killed in Paris when the newsroom of French magazine “Charlie Hebdo” was stormed by two gunmen. The gunmen were identified as brothers Cherif and Said Kouachi.

On Jan. 8, a policewoman was killed in Paris by a separate gunman while responding to a traffic accident. This man was identified as Amedy Coulibaly.

On Jan. 9, the Kouachi brothers found to be hiding in a printing firm on the outskirts of Paris. Police surrounded the building and a standoff began.

Concurrently, Coulibaly, the same gunman that killed the policewoman, held several people hostage inside of a kosher grocery store. He threatened to kill unless the Kouchi brothers were allowed to go free.

The Kouchi brothers were killed by police upon emerging from the printing firm building.

Over the three days, the death toll in Paris reached 17 people. The three gunmen have been killed, although there are several suspects that may be connected with the attacks.

“Charlie Hebdo” is a satirical magazine based in Paris. It is well known for its satirical caricatures of religious figures, including the Prophet Muhammad.

The gunmen that carried out the “Charlie Hebdo” attacks were heard shouting, “We have avenged the Prophet Muhammad” and “God is Great” in Arabic while leaving the crime scene, according to BBC News.

It is unknown which group the attackers were working for, if any.

Isabelle Rocher, an international student from Normandy, France, was shocked by the attacks. She finds hope in the reactions of her country.

“After watching the news and seeing how the citizens reacted to it I realized that we are united and we won’t let those people get us down,” said Rocher, a recent ULM graduate.

Dillon Wiley, a sophomore pre-medical major, said it is important that we all fight terrorism, as each time an attack is made, someone is trying to take something from us.

“In the case of the “Charlie Hebdo” attack, it just happened to be our sense of freedom to say what we feel. The best response to an attack like this is to exercise what they tried to take from us, and that’s exactly what we’ve seen following this tragedy,” Wiley said.