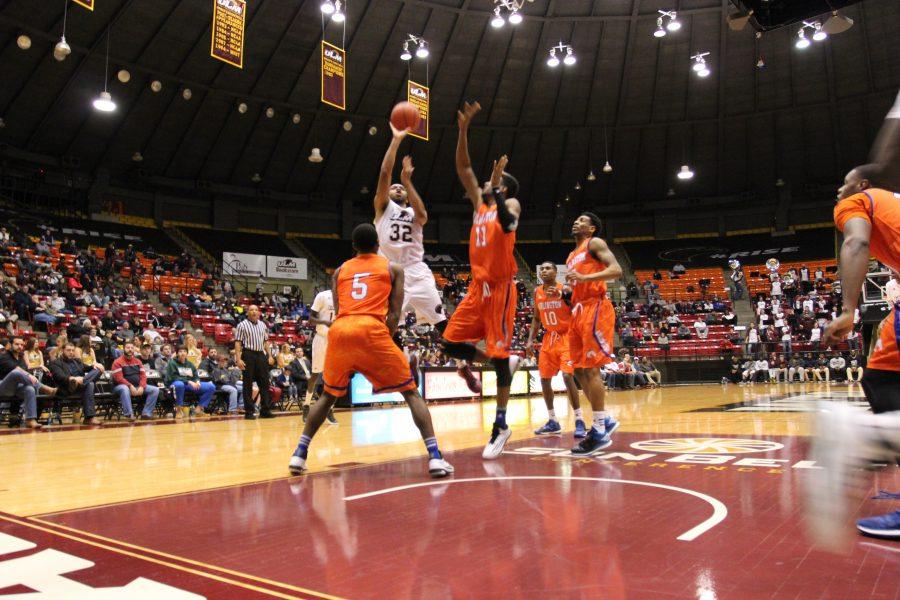 Richard arrived on campus in 2010. The program was in bad shape. The failing Academic Progress Rate took away so many scholarships the Warhawks were starting walk-ons. There were games when there were only eight players eligible to play.

Richard said that there were doubts along the way if the program could get back on its feet.

“Some people have described it as our program was on life support, and in many way they were right,” he said.

Through those years the Warhawks focused more off the court than on the court. Richard says that ULM put full effort into cleaning up the academics. The team left starters at home to attend class, brought tutors on road trips and did not have practice until every class was over for the team. Richard said that the university put on a “full court press to turn ourselves around academically.”

The effort paid off for the Warhawks. The team won the SBC academic award for both the 2012-2013 and 2013-2014 seasons. Those two years also earned the school consecutive Team Academic Excellence

Awards from the National Association of Basketball Coaches. The 2012-2013 team was one of only 21 teams in Division 1 to post a cumulative GPA above 3.0.

The Warhawks struggled because of this process. The first year brought a 7-24 record. The next year featured just three wins to go along with a 26 losses. That season was the worst in ULM history.

The next year was not much better as the team got one more win with three fewer losses.

The next year saw ULM begin to turn the corner. The team posted a 10-17 record, more than doubling their previous win total.

This year the Warhawks have started off hot. The team has already eclipsed last year’s win total, boasting a 12-8 record. ULM has their sights set on making a possible run at the conference title and a NCAA tournament bid.

This would have not been possible with Coach Richard. Richard holds a special place at the university, not just as a coach, but also as a player. Richard played at ULM for four years. The first year was spent under half of Fant-Ewing’s namesake, Lenny Fant. The next couple years were played under Benny Hollis. His final year was the first year of legendary coach Mike Vining.

Richard was an integral part of those teams. He was named team captain of the Indians twice as well as leading the team in assists for two years. Those teams captured the Trans-America Athletic
Conference Championship three out of the four years with Richard as a playing. He was a part of the 1982 squad that made it to the NCAA Tournament. That was the first time the school had ever made the big dance.

Athletic Brian Wickstrom believes his deep connection to the university is a reason for the success the team has been able to achieve.

“He truly, genuinely cares more about this basketball program more than any place in the country,” he said.

Throughout the fluctuations of the program, Coach Richard has been a stabilizing influence. He’s been here through the bad times. It seems that he’s now leading ULM to the good times.