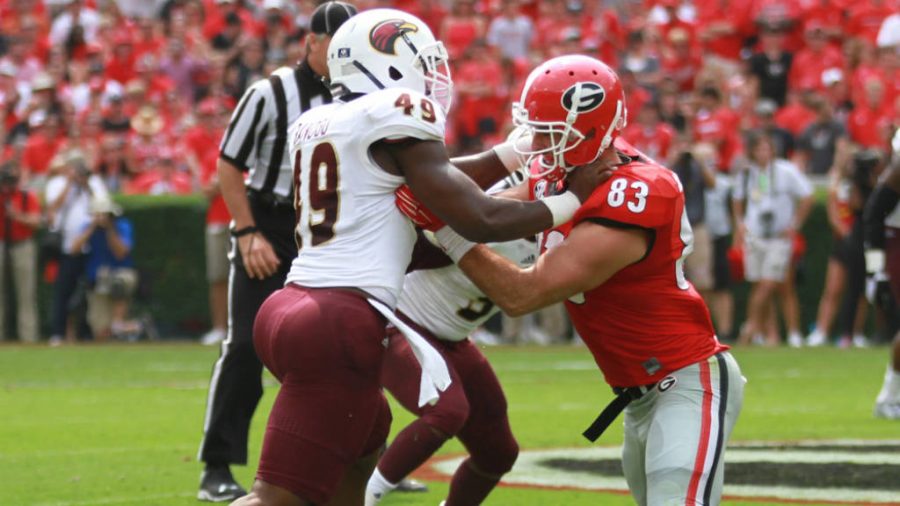 The Golden Hurricanes of Tulsa swept past ULM in a close road contest ending 34-24. A late surge by the Hurricanes in the fourth quarter sealed the Warhawks fate and brought the Warhawks road record to 0-3.

The offensive fire power of Tulsa edged the Hurricanes past the Warhawks as they ran 30 plays more from the line of scrimmage and held a 10 minute advantage in terms of time of possession.

Each team committed over eight penalties for more than 70 yards, but it was the turnover battle which proved ULM’s Achilles heel. The

Hurricanes turned an interception and fumble into two Tulsa touchdowns. The Warhawks would intercept the ball once but failed to convert the turnover into points.

Coach Berry Smith was proud of the way his team came out in the second half but acknowledged that turnovers hurt them.

“We did have some momentum there, and they hurt us with those turnovers,” said Smith.

The Hurricanes struck first kicking in a field after converting a fourth and short on the ULM 43 yard line.

The Warhawks looked to answer with a field goal of their own after marching down the field in similar fashion. But kicker Craig Ford missed his first career boot from 44 yards out and the score remained 3-0 Tulsa.

With 31 seconds left in the first quarter Tulsa struck again taking in their first touchdown of the night. The play came on a one-yard quarterback keeper by Zach Langer.

After running back Kaylon Watson fumbled for the Warhawks the hurricanes looked poised to strike again as they would begin their drive in ULM territory. But a fourth down sack by defensive lineman Ben Banogu gave ULM back possession of the ball.

Banogu stated the team came prepared to play defensively, but that there are issues that need to be corrected.

“We really honed in on Tulsa’s offense in practice so we knew what we were going to get. I think that we can take everything that we learned, both good and bad, and look at film and make adjustments…,” said Banogu.

An efficient drive down the field followed with quarterback Garrett Smith hitting receivers Jared Mapps and Ajalen Holley for deep strikes down the field. The drive culminated in a three yard Smith touchdown run and the Warhawks were on the scoreboard down 10-7.

The Warhawks stood firm the next Hurricane possession forcing Tulsa into a missed field goal opportunity after the Hurricanes had the ball at the ULM three yard line. The Hurricanes would drive down the field their next possession though and kick in a 28 yard field goal to up the lead to 13-7.

With only 30 seconds before the close of the half Tulsa hit a 36 yard touchdown pass to bring the score to 20-7.

The Warhawks opened the second half determinedly and drove the ball to the Tulsa one. A false start on fourth down led to ULM settling for a 22 yard field goal which Ford knocked in.

Lorenzo Jackson of ULM blocked a field goal on the Hurricanes next possession and the Warhawks set up shop on the Tulsa 43. Smith closed the gap to 20-17 on a 26 yard touchdown pass after converting a fourth and six.

Tulsa would miss a field goal their ensuing drive and Devontae McNeal would dash 43 yards on ULM’s ensuing possession to give the Warhawks their first lead at 24-20.

With under nine minutes to go Tulsa took advantage of a Smith interception to complete a touchdown reception and regain the lead. A fumble on the kickoff by Trey Caldwell of ULM led to the Hurricane’s final touchdown of the night. Tulsa would end the night with a 34-24 victory.