Ask them why you deserve Hell 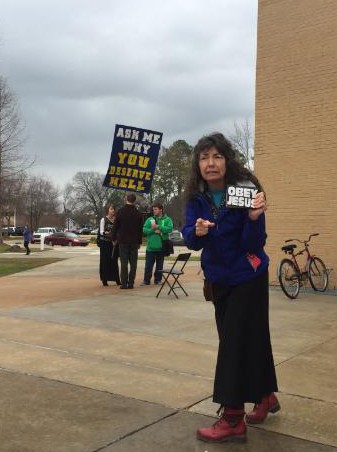 An inside look at the campus-visiting “confrontational evangelists.”

Kirsten threw her hands in the air, carrying a Bible up with them, as she exclaimed her message to the crowd gathered outside of the Student Union Building.

“I am sin free! I am pure and holy before God! God has clean 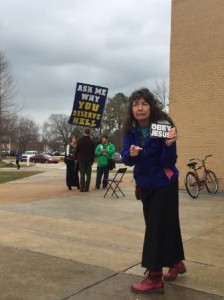 The students, who stood at a distance not long ago no longer allowed Kirsten her personal space. They surrounded her with questions and comments, yelling back as she shouted to a crowd that no longer cared what she had to say. They were visibly aggravated.

“Can I ask you a question?” a student asked.

“I do not take questions from homosexuals! Only Christians are allowed to ask me questions!” Kirsten said.

Kirsten’s brother watched from his folding chair, set back from the crowd by the wall of the SUB.

“We’re using her because she’s usually the calmer one,” Joshua said, dressed in his Eagle Scout uniform. “I tend to rile them up more. They wouldn’t want me out there right now.”

Students screamed obscenities as Kirsten preached against getting drunk.

Joshua didn’t mind the crowd screaming at his sister. He said he is used to it.

“We don’t take it personally,” he said.

At 20 and 23 years old, Kirsten and Joshua Borchert are peer preachers. The brother-sister pair from Laffayette, Ind. travel around the country preaching at universities with The Campus Ministry USA, a group of preachers led by Brother Jed Smock. The group identifies itself as Pentecostal.

Last Monday, Brother Jed, Kirsten, Joshua and five other preachers came to ULM to practice what they describe as “confrontational evangelism.”

With signs covered in sayings like “ask me why you deserve Hell,” it seemed to students that their intentions were to invoke anger and attention.

“We go through different stages and cycles. She does that to get their attention, and once she gets their attention then she can continue to calm them,” Joshua said. He then explained the five-stage technique used by the group to humble the students into a calm crowd that can then receive their message.

Joshua, who now works for his parents’ carpet cleaning company when he isn’t evangelizing, said online that he was a “wimp” who was paralyzed by fear before he fell under the influence of Brother Jed five or six years ago at Purdue University.

Now Joshua practices his faith loudly and boldly, along with the rest of the Campus Ministry USA group.

Joshua and Kirsten have preached at around 30 universities in about 20 different states, Joshua said.

“Mardi Gras is of the devil!”

Kirsten hadn’t been screaming all day. Earlier, she had taken time to explain the group’s purpose while her brother ran the show.

“Our message is repent, and be free from sin. Because if these people don’t repent, then they’re headed for hell,” Kirsten had explained.

Kirsten and her brother professed to be free from sin. They said that their freedom allows them to preach boldly, as they usually preach individually.

Monday, the group sent up one preacher at a time while the others held signs, individually spoke to students or watched the performance from behind the lime light.

Even earlier in the day, Sister Cindy Smock, wife of Brother Jed, took her turn.

“Some of the females here, it seems that your highest ambition is to get a PhD in oral sex!” she said.

Cindy then told the on-looking students that leggings are a gateway to hell.

Sister Cindy said that the group is made up of Bible-believing Christians who travel to warn students that they must free themselves from sin. According to Cindy, the group preaches specifically to college students because they are at a “good age to think about these things.”

The group often sees students laugh at and make fun of their evangelism. Cindy said that they should not take their message as a joke and that they can intelligently defend their faith.

“We’re here giving them the truth and whether they realize it or not, they’re getting the truth,” she said.

The Campus Ministry USA networked with local preachers over Facebook who invited them to come to ULM last year and then again last Monday.

Willard Manning, one of the local preachers, lives in West Monroe and regularly preaches outside of Monroe’s bars on Saturday nights. Manning stated that he preaches to students out of love for them.

“Some of the people think we’re out here hating because we’re teaching the truth, but that’s a lie, we’re preaching love,” Willard said, wearing a shirt that featured cartoon-like hellfire and read “JESUS SAVES FROM HELL” while Sister Cindy screamed at students, calling them whores.

The group was unimpressed with the students of ULM.

She also said that the group realized the extent of its impact here. She acknowledged that their preaching was somewhat ineffective on some students. She pointed to Cameron Primeaux, a freshman toxicology major.

According to Primeaux, the group gives a good example of what not to do.

“I am agnostic at heart, I don’t have a personal religion, but I can tell you that in my views I would never accept something like this as a real religion,” Primeaux said. He pointed out that he found the group’s signs and speeches immoral.

Sister Cindy is accustomed to hearing such criticism, but she said that the group still has a purpose even when some doubt them.

“We’re only here for a few that want to get right with God. The ones that are defending their sin will just continue in their sin,” she said.

According to Joshua, ULM isn’t the worst university they’ve ministered to, but it isn’t the best either. He described ULM as a “kind of a chaotic university,” which is significant because students from LSU, the school the group visited last, poured a smoothie on him.

Luckily, Joshua said, the students at LSU did eventually become calm and subdued, and the group was able to talk to them.

That never happened at ULM.

On a video posted later in the day to Brother Jed’s YouTube channel, Joshua held the camera on himself and laughed as he summarized the day.

“So today was very sad, very tragic, that these hypocrites think they’re going to heaven, and they’re headed straight for hell,” he said.

“Warn all of your friends,” he said, flashing a huge, white grin before the picture went black.