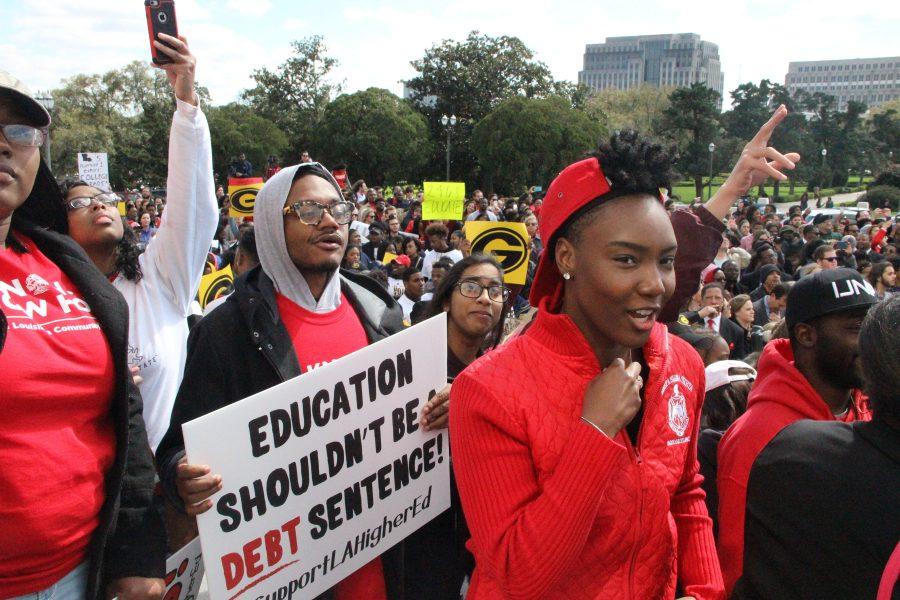 Most students never saw it coming, but for Jeffery Williams time was all that stood in the way of our current higher education funding crisis.

“I remember the big cuts that we took last year, and I remember I expected it to be this bad if not worse,” said Williams, a junior kinesiology major.

Williams, a Louisiana state resident and TOPS recipient, chose to stay in state for school because it was what he could afford. Now, he said, budget cuts are a growing inhibitor to receiving his degree and he wants state legislators to know it.

Williams traveled to the Louisiana State Capitol building in Baton Rouge with a group of other ULM students to attend the BringH.E.A.T. higher education rally last Wednesday.

The BringH.E.A.T (bring higher education all together) rally was set up by the Louisiana Council of Student Body Presidents (COSBP) and the Louisiana Board of Regents in only about a week’s time.

ULM students travelled on a bus provided by SGA to the rally that was attended by over 2,000 higher education students from across the state. The rally began at noon. For roughly one hour students assembled to demonstrate to state leaders that higher education must be prioritized.

SGA presidents, some legislators and Gov. John Bel Edwards addressed the crowd of students to encourage their efforts and to promise to fight against further cuts.

“What you’re doing here today by standing up, by making sure that your voice is heard, it is critical during this period,” Edwards said.

Speakers were met with roars of both support and anger as they spoke of what further budget cuts may mean for state schools. Students chanted, “no more cuts!” whenever the chance arose.

Williams said that the rally seemed to be effective.

“Our new governor and some of the legislatures seemed very genuine yesterday so I’m hopeful that maybe they can fix the problem,” Williams said.

The Louisiana State Legislature is entering into its third week of special session in which they are attempting to create and pass solutions to fix the state’s crisis-sized $940 million budget deficit for this fiscal year as well as the $2 billion shortfall for the upcoming fiscal year.

Louisiana’s budget gap may be starting to fill up after two weeks of special session. The state’s House of Representatives passed the so-called “clean penny” bill that will add an additional cent to sales tax until it reaches its sunset, or expiration, date in 18 months.

Along with passing this bill to the Senate, the House voted to draw revenue from the Rainy Day and BP settlement funds and to approve another $101 million in cuts.

All together, these changes could shrink the current $940 million deficit by $638 million.

The additional penny tax, which Gov. Edwards has deemed the “single largest component” of his proposed tax package to fix the state’s budget problems, was carried by state Rep. Katrina Jackson, D-Monroe.

Jackson, a ULM graduate, spoke at the BringH.E.A.T. higher education rally on Wednesday, the day before the bill passed in the House, and asked students to call their representatives before the vote took place so that they could “move your (students’) funding.”

The Special Session is set to conclude March 9.