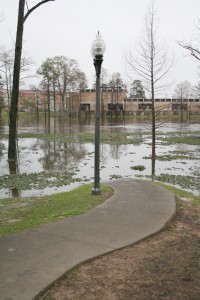 Christopher Wade, senior psychology major, was browsing on Student-to-Student’s Facebook page when he saw a post asking for volunteers on behalf of the American Red Cross Wednesday. He immediately contacted Red Cross. Within an hour, Wade was busy helping his community.

Many students and faculty members were displaced or trapped in their homes last week due to the flooding. Others said they were lucky not to have any physical damage to their homes, but they couldn’t stand by to watch the damaged spirits of the community.

“When we got there it was a little chaotic because we were all new,” said Wade. “We helped pass out food, people were getting rescued, the fire department was dropping dozen of people off at a time.”

Red Cross, a relief suffering organization, worked together with the firefighters, law enforcement and volunteers to help save families from the life threatening flood last week. The rescuees were taken to the community center.

Volunteers fed them and provided them with clothes, toiletries and other necessities needed.

Wade said he was so impressed with the amount of students who volunteered. He saw them sand bagging and helping clean the shelter. There were student groups and some who just came on his or her own.

Dillon Wiley, junior biology major, was one student who showed up by himself. Like Wade, Wiley saw a post on Facebook and started helping just two hours after signing up.

Wiley said he knew he had to help because that is the way he was raised as a child.

“I remember my dad was always the first to help people through things like Katrina, and he was sure to involve me in the work,” Wiley said.

Anyone can volunteer. In some cases, all it takes is showing up. Wade said showing up and working hard is something everyone should do.

“I do feel like there’s a collected responsibility that people should feel towards each other and when things like this happens you really need to be there for each other,” said Wade. “Next time we may be the ones that have to sit in the shelter.”

“I was blown away with the lack of selflessness and as a Christian, that’s a good thing to see. It’s better to help people than to help yourself,” Tennessee said.

Tennessee said he remembers when he was younger, people knew if they needed help they could count on the community to help. Today, he said, people don’t have the same confidence.

To restore the confidence, Wiley said it’s the adult’s responsibility to make sure the young know how important it is to help anyone in need.

“We need somebody to lead us into it, because we’re very willing to do it,” said Wiley. “That’s like me showing up without experience to the shelter. I was only able to do that because someone older than me, on the other e
nd of the phone line, coached me through it.”

Tennessee said there is still a lot of work to be done and students or faculty can call the shelter, or any shelter, and ask to volunteer.