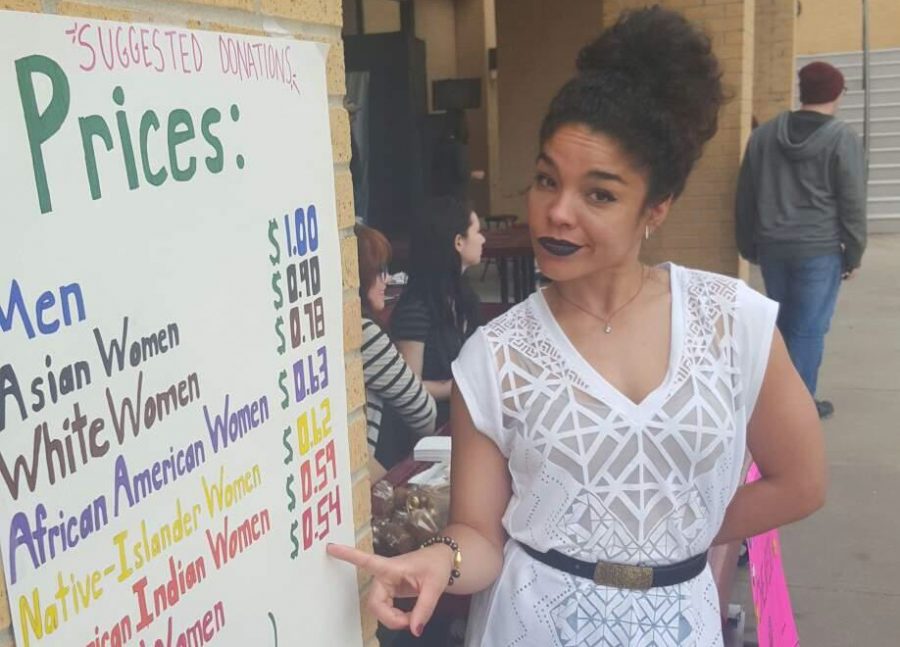 ULM students were in for an unequal treat. If they wanted the goodies, they had to pay what they earned.

Patrons were charged according to what they are paid on average in the Louisiana work force based on their gender and race. The point of the sale was to bring awareness to the unequal pay American women and minorities still face.

All the proceeds went toward the Wellspring, a local non-profit.

The sound of fast paced pop music and laughter filled the air as students huddled into the photo booth with their friends. They grabbed emoji fans, horse masks and fake mustaches on a stick to celebrate the day of women empowerment with a picture.

Though for junior english major Kimberly Doughty, this day was more than a celebration with cupcakes and coins. It was a day to bring awareness. A day to finally be heard.

“I hated seeing young girls like myself being objectified just because they were women. I wanted to show that no matter who you are or where you come from, every woman has a voice,” Doughty recalled.

Despite the current bias in her town, Doughty joined FemHawks to take a stand for gender equality.

International Women’s Day recognizes gender and race equality and brings awareness to anti-sexism. It was first celebrated in 1909.

“[People think] that feminists are constantly complaining and angry and…that we don’t need to fight for anything anymore; but they have not been exposed to [unequal pay] or misrepresentation in the media,” Rivera said.

The American Association of University of Women states that as of 2014, women are paid 79% of what a man makes.

Even though the gap has “narrowed since the 1970s, progress has stalled in recent years, and the pay gap does not appear likely to go away on its own,” AAUW states.

As some regions, such as D.C. increased the pay gap to 90%. Louisiana ranked last on the pay gap deficit at 65%. Studies shown that women of color– including but not limited to African-Americans, Native-Islanders, American-Indians, and Hispanics– are most likely to receive less than the 65% of a man’s dollar.

The FemHawks frosted their month-long serving of feminism awareness, but the final touches have yet to come. They will continue to host lectures and social events to bring more awareness of what it truly means to be equal.