After months of worrying about the security of TOPS funding, students still aren’t sure what to plan for. Louisiana Governor John Bel Edwards announced Thursday that, as of now, TOPS will not be fully funded next semester. No details of reform to the program are certain yet. 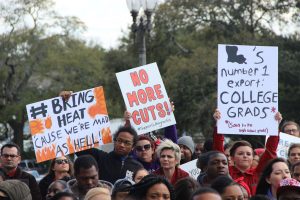 Edwards said in a press conference that there is no way that TOPS will be fully funded unless the state raises more revenue, probably with taxes.

The TOPS program would require $300 million to fully fund, but only $60 million of that is secured so far. The discussion on TOPS will leave students waiting for answers until the summer, when another special session to attempt fixing the budget crisis will likely be held.

TOPS is currently set up to allow any graduating high school student with at least a 2.5 GPA and a score of 20 on the ACT to qualify for a TOPS scholarship that pays tuition to any four-year university in the state.

Although no solutions are set in stone yet, the state legislature is considering a bill that would force students who only meet the minimum qualifications for TOPS to attend a two-year community college before transferring to a four-year university. This means that the around 1,000 students that qualify with a 20 on their ACT and a high school GPA of at least a 2.5 would not be able to attend a four-year university initially.

These 1,000 students are only about 2% of the roughly 52,000 students that receive TOPS in Louisiana. State lawmakers said the change would save “millions.”

While the proposal has its ups and downs, most students think that such a change would be appropriate although tricky.

“I completely agree with raising the TOPS requirements in this manner. This may sound rude, but a 21 is fairly low when you consider an 18 to be 50% of all answers being correct,” said Kimmy Doughty, a junior English major.

However, Doughty does point out that such a change may complicate the already existing problem of transferring community college credits to universities.

According to Doughty, that is something that the state should fix before filling community colleges with students that are expected to transfer. Overall, Doughty realizes that changes will have to be made in the future to keep Louisiana running.

Many students point out that problems in the Louisiana education system extend beyond the TOPS funding issue. Students note that the problems start earlier than college.

“I support raising the TOPS requirements, but the state has to help out education funding overall- not just college. In so many parishes, classrooms are packed to the maximum, there are shortages of teachers and inadequate resources,” said Abigail Fertal, a senior speech-language pathology major.

Other students said that starting at a less-rigorous two-year college may be helpful to struggling students or students that didn’t get the attention they deserved in high school.

“I think more than anything people need to change their views about two-year colleges. The first two years at a university are nothing but pre-requisites anyway, why not save loads of money and get the attention you need to be the best you can be (at a two-year college)?” said Valandria Bell, a senior health studies management and marketing major.

The governor’s budget proposal for the next fiscal cycle beginning July 1 is expected to be announced Tuesday. Louisiana is currently facing a $750 million budget shortfall for the upcoming year.