More painful than a foot ache

Dr. Teri B. O’Neal, Ouachita Parish coroner, said one in four women will experience sexual abuse at some point in her life.

Eighty percent of women in an abusive relationship will leave and return. One in 16 men will be sexually assaulted at some point in his life. 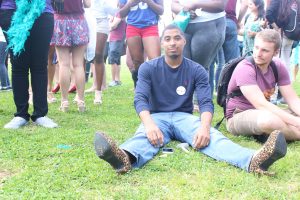 With a vision to bring awareness to sexual abuse and the victims that survive it, Femhawks hosted the first “Walk a Mile in Her Shoes” event Wednesday.

Men and women started at the Quad and walked a mile through campus to honor abuse victims.

The women walked casually in heels or flats, but the men were taken out of their comfort zone with high heels and fluffy-teal boas. Teal is the support color for survivors of sexual assault.

Will Rogers serves on the Femhawks faculty advisory board. He participated in the walk in a pair of red pumps in support of many friends, both male and female, who have been in abusive relationships.

“I myself have been in abusive relationships with former partners. One in particular… I felt too ashamed and too broken to say anything (about),” Rogers, assistant professor of English, said.

But the event encouraged victims to speak out. After the men strutted their stuff, a candlelight vigil was held in Bayou Park to bring awareness to the problem of domestic and sexual assault.

Femhawks partnered with The Wellspring Alliance, Project 41 and the Ouachita Parish Coroner’s Office to bring several different angles to the topic of abuse. Several attendees shared their testimonies.

Kimberly Roberson, an english instructor, was on of many who shared.

Roberson said many women stuck in abusive relationships try too hard to rationalize the situation. They think they are crazy or things “aren’t real”.

“Always know there is a way out. Listen to your instinct. If your instinct is telling you something is wrong then pay attention,” Roberson said.

She also said victims should always tell someone, even if it seems difficult.

“Once you admit it to yourself, things start to clear up,” Roberson said.

Not everyonce attended shared, but most said they were there as supports. Mayor Jamie Mayo was one.

“This issue is worldwide as well as an issue we suffer from as a community. To create awareness, this is necessary,” said Mayo, who also expressed his respect for those who contributed organizationally to the event.

Femhawks, whose mission is “embodying feminism through equality” want to keep abuse a hot topic. Rogers said he hopes to see more from the walk and candlelight vigil than a one-time success.

“I would just like these sort of events to have an impact now. These should really start conversations about abuse,” said Rogers, who wants to have more events like this in the future.

After staying for the vigil, Hickman said the event meant a lot to him because he has family members and friends who have survived domestic and sexual abuse.

“It was really powerful. I was almost moved to tears a few times. I think it really got what it wanted to say across and I really hope a lot of people take this to heart,” Hickman said.