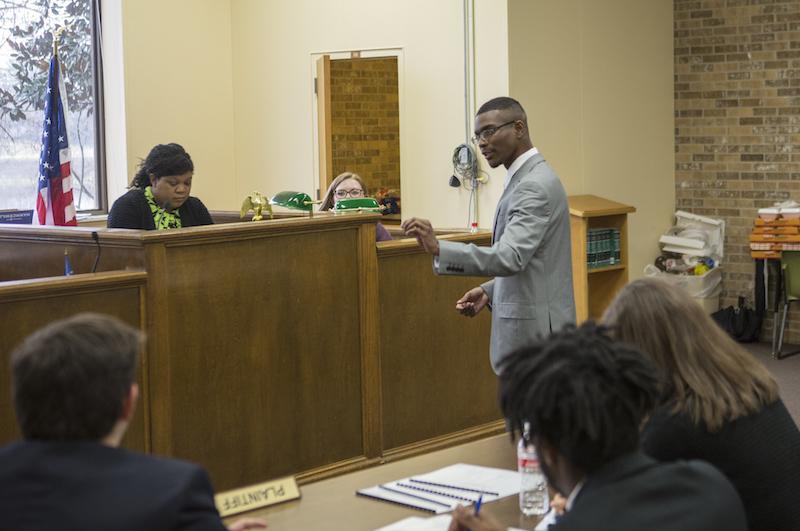 The ULM Mock Trial team usually travels hundreds of miles to compete against other universities. But last Sunday, the organization stayed home and hosted the Bayou Bash in Strauss Hall.

The case involved a new CEO making changes that were intended to target older workers and force them out of the business, according to Charles Dupree, a senior political science major and captain of the Maroon Squad.

Though no verdict was given that day, the mock trial team will compete against Millsaps in Jackson, Mississippi, along with other schools such as Louisiana State University and Mississippi College for their regional tournament Feb. 17-19.

Dupree said that Sunday’s competition will help them for regionals.

“This weekend gave us an insight on things we need to tweak,” Dupree said. “It was essentially a good tune- up game. We had three team members taking on roles they had never done, two who were trying attorney positions and did excellent.”

One of the squad members, Taylor Houston, played an attorney role on plaintiff for the first time and a witness role on defense.

Houston said though she let her nerves get the best of her initially, she eventually shook them off.

“As soon as I stood up and opened my mouth, everything felt right,” said Houston, a junior political science major.

Though she won’t play the attorney again until next season, Houston said she loved playing the role and the position reassured her that this is the route she wants to take in life.

Dupree said the team dedicated countless hours to the program to get better.

“The Maroon team this year perfectly embodies the concept of ‘iron sharpens iron,’” Chavis said. “To sum it up, we’re a team in every sense of the word.”

At the end of the case, Johnson gave comments on the team’s performance.

“I will say, you guys are very, very impressive,” Johnson said.

Johnson said the team “did a fantastic job on the attorney examines and witnesses.”

Receiving positive feedback, Dupree said he has no doubts about his team going into regionals this week.