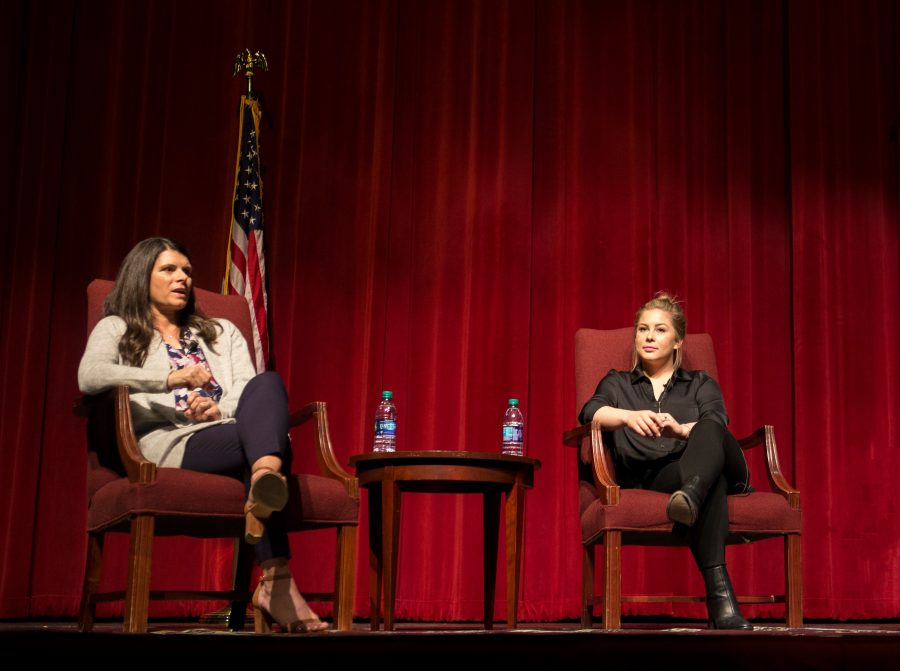 Imagine walking into a Schultz cafeteria that was as big as a football field and seeing thousands of people of different ethnicities, all athletes, representing their country.

This was what Olympic gold medalists Mia Hamm and Shawn Johnson saw every day when they wanted something to eat in the Olympic Village.

Hamm, a member of the first women’s Olympic soccer team, and Johnson, a member of the 2008 Olympics United States women’s gymnastics team, were this year’s featured speakers for the  Lyceum Series.

Hamm and Johnson discussed the dedication and determination it took to win the gold in Olympic soccer and gymnastics in an interview moderated by Laura Jennings, director of Student Life and Leadership.

Lyceum was held in Brown Auditorium on March 9 at 7 p.m.

Jennings said that they wanted to have a mix of entertainment and education with the speakers they chose this year.

“We especially wanted to bring some female speakers to start off Women’s History Month, and we were thinking, ‘What’s more inspiring than going to the Olympics?’ So, that’s why we chose them,” Jennings said.

Jennings introduced Hamm and Johnson by telling the audience a little bit about both of them before they walked out on stage to begin the interview.

The main topics centered around why they chose the sports they did, their Olympic experience, what it was like to hear the U.S. national anthem played after winning the gold medal and their endeavors after the Olympics.

Hamm said she was one of six kids, and her mom wanted her out of the house. She was the fourth child, and all of them got the chance to play soccer.

“I played all different sports growing up, but soccer was the one thing that, as I grew older, seemed to fill more of my heart,” Hamm said.

Johnson’s parents put her in gymnastics when she was three years old. Johnson said she started mommy and me classes because her parents didn’t know what to do with her.

“I was this little kid running around the house and I had way too much energy. They would leave me for a second and come back and find me on the entertainment center. I tried a lot of other sports, but I always went back to gymnastics. It was my favorite, that’s why I stuck with it,” Johnson said.

Johnson described hearing the U.S. national anthem as the greatest feeling in the world, but also a confusing one.

She said she had every possible emotion running through her body. She was excited, very tired, craving a cheeseburger, in shock and even a little sad.

“I remember being sad honestly, because my entire life up until that moment was devoted to that one moment, and it was now over. So, it was this realization of what’s going to happen afterwards, and I was scared,” Johnson said.

Hamm said that a lot of people don’t realize how long the athletes have to wait before the medal ceremony actually happens after each event. Sometimes, it can be up to 30 or 45 minutes. For winter Olympians, it can be all day.

For Hamm, the best part about winning the gold at the 1996 Olympic Games in Atlanta was that after they won and had to wait all that time for the ceremony, no one in the crowd left.

“We walked out and not one person left, and we heard the crowd and then stood up there together,” Hamm said.

Mia Hamm retired in 2004 after the games in Athens, Greece.

Before the speakers took the stage, they had a press conference on the seventh floor of the library, followed by a patron party where Hamm and Johnson mingled with fans before going over to Brown Auditorium.

“My favorite part was the patron party. I held coats, purses and took photos for people as they met Shawn and Mia. Seeing dozens of people meet their heros was a great moment to witness,” said Michael Roboski, coordinator of Student Activities.

At the end of the event, Jennings asked Hamm and Johnson if they had any advice for the students at ULM. Their first response was to go to class.

“You get out of it what you put into it,” Hamm said. Johnson said to make sure you have fun and enjoy what you’re doing. At the end of the day, they encourage everyone to find something they’re passionate about and run with it.