No resources left for collections on campus

Administration says specimens must be given away, does not expand museum 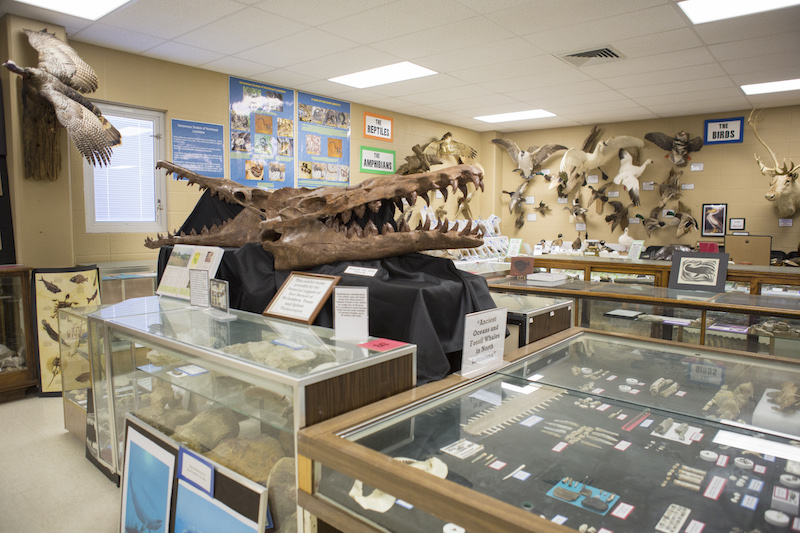 The specimens on view at the ULM Museum of Natural History are separate from the research collections that may be destroyed.

Administration said millions of plant and animal specimens will be destroyed if they are not moved so that track and field facilities can be renovated. Right now, there is no other space on campus for them, and they take too many resources to maintain, according to Vice President Eric Pani.

ULM’s Museum of Natural History curators did not plan on having to move the research collections off campus, and now they have three and a half months to do so.

Pani said the specimens, except for some teaching specimens, must be relocated from their current home in Brown Stadium by mid-July.

Thomas Sasek, museum director, called the ultimatum “unnecessary” and said there is no chance the specimens will be destroyed, because other institutions have already offered to take them. Regardless, he said that curators were hopeful to keep the collections on campus, and that three and a half months is short notice to move millions of specimens.

In a 2013 ULM News Center article, ULM announced plans to expand the museum to include its research collections, which are kept separately from the displayed collections. Collections for viewing are currently in Hanna Hall and will remain on campus.

“The intent was that we were going to move it back onto campus afterwards, but there are some other things going on that just don’t allow that to happen right now,” Pani said in an interview with The Hawkeye on Thursday.

Pani said these things are confidential at this point, but are academics-related and will probably be announced in the next couple of weeks.

Pani added that ULM no longer has resources to care for the collections. Maintenance is time-consuming, he said, and the collections must be kept under specific conditions.

“I’d rather see it go someplace else where someone can care for it and preserve it and it gets used than keep it here and see it deteriorate if we keep it. That’s the bottom line,” Pani said. ‘

Curators have always been aware the collections could only stay in Brown Stadium temporarily because the space belongs to athletics. They believed that when the collections were moved, they would be moved somewhere else on campus because of the museum’s planned expansion.

When first told of the decision, curators asked for 48 hours to find another place to house the collections on campus, but no suitable space was found. Now curators have three and a half months to and a new institution to house the more than 6 million specimens in the collections, as well as transport them from ULM.

Pani’s decision was made the same week ULM announced its SOAR campaign had raised $38.8 million for campus projects such as “research funding… renovations and construction,” according to an article published by ULM News Center.

“ The SOAR campaign was formally launched in 2013 as a capital-generating campaign that supports students, faculty, athletics and renovations and construction around campus,” the article said.

Higher education across the state faces an $18 million cut in next year’s budget already. ULM faced budget cuts over $3 million during the 2015-2016 school year.

Pani told Sandi Lemoine, the dean of the College of Arts, Education and Sciences, last week that the collections would have to be relocated by mid-July.

“My understanding is that the project was approved by the ULM Facilities Corporation near the end of February 2017,” Pani said.

Sasek was told of the decision on Monday.

Athletics Director Brian Wickstrom said the renovations are not fully funded and haven’t been fully approved yet. e project will be up for overall approval during the Board of Supervisors meeting on April 20.

“Technically, no project is official until after approval,” Wickstrom said.

Wickstrom has been trying to raise funds for a renovation to the track since arriving in 2013 and even secured some funding last year.

Wickstrom added that he was not responsible for notifying administration that the collections would need to be moved, but that they have been looking at all of the di erent options for a number of months.

Pani said he found out about the track last week.

Sasek said he understands why the collections must be moved, and that curators have considered what would happen if the collections had to be moved off campus before. He did not expect to have to move the collections so quickly and said it will be possible, but difficult.

“You can’t just throw them in a truck,” he said.

According to Sasek, the collections won’t be moved back to ULM in the future, because that “never happens.”