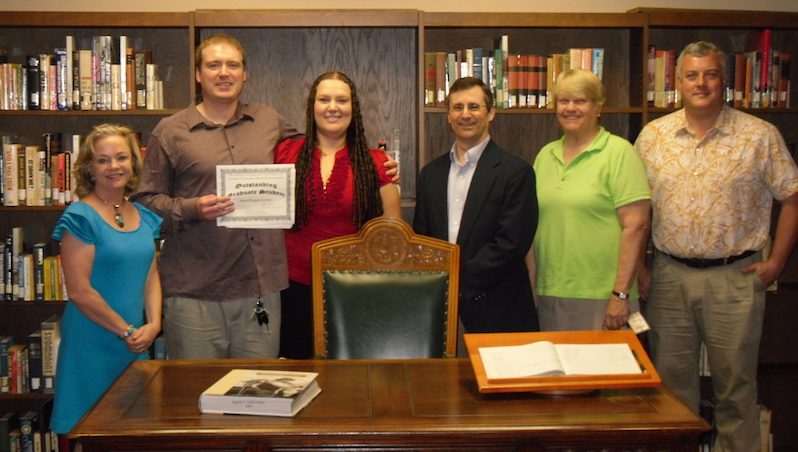 For Monroe native James “Reagan” Fancher, he and history have history.

The ULM graduate student and assistant fell in love with history in the fourth grade, and now he’s working on his master’s degree to teach it, gaining a $1,000 award in the process.

Fancher received the award from the Monroe Chapter of the National Society of the Colonial Dames of America.

According to associate history professor Jeffrey Anderson, Fancher was very surprised when they told him he won, continuously saying “thank you” for the award.

“We don’t have a lot of outstanding graduate students, but he stood out to us,” Anderson said.

Every four years, the organization gives the award to an outstanding ULM graduate student of the history program’s choice. 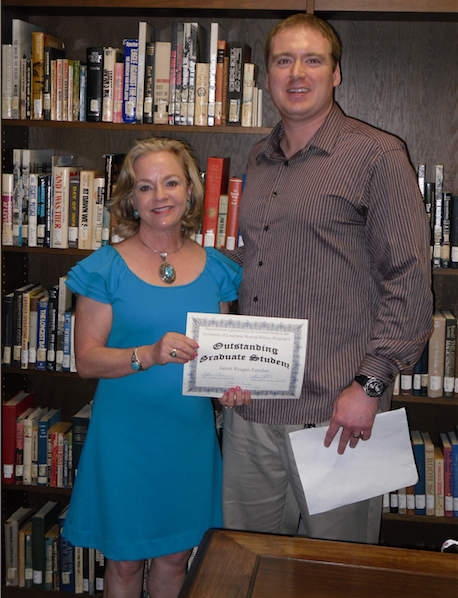 The organization, founded in 1891, “promotes appreciation for the people, places and events that led to the formation and development” of the United States.

Students that are doing historical research or doing research that promotes the appreciation of the American past are considered for the four-figure award.

“He is a generally nice guy. He does really well in all his classes. He really does fit the image of what you would call an outstanding graduate student,” Anderson said.

Although Fancher isn’t sure about what he will do with the money, he said he was surprised, happy and thankful to receive it.

Fancher received an associate degree from Delta Community College and a Bachelor of Arts in History in 2015 from ULM.

He is currently writing a research paper on the Soviet-Afghan War – a part of the world he said really interests him.

Aside from his interest in the Soviet-Afghan War, Fancher is also interested in Middle Eastern, South Asian Islamic and Eastern European history.

“History is sort of like solving a puzzle. It’s a passion of mind,” Fancher said. “You go and you put together the pieces to the puzzle and you just see where they all fit together and what influences what.”

Although he always loved history, Fancher said his goal of becoming a history professor on a collegiate level wasn’t always obvious.

“I have a great deal of respect for that man,” Fancher said. “He’s the one who unknowingly influenced me in that direction.”

Since then, Fancher has been fortunate to meet professors at Delta and ULM who are just as passionate about history.

Fancher hopes to teach his future students what’s important in history and why it’s important to know about the past.

“I think people go through high school and they end up hating history because maybe they have a teacher that’s not as passionate about it,” Fancher said. “It’s not just a bunch of dates and figures.”

Fancher said he would like to encourage others to learn history so they can see how interesting and fun the subject can be.

“I actually enjoy anything history. I am a student of all history,” Fancher said. “It’s something I enjoy.”

When Fancher isn’t studying or working on research papers, he likes to read.

Fancher and his wife, Graziele Fancher, also like to workout early in the mornings or take trips to Dallas to eat Brazilian food at their favorite restaurant, Rafain.

They also take trips to Brazil a few times out of the year to visit his wife’s family.