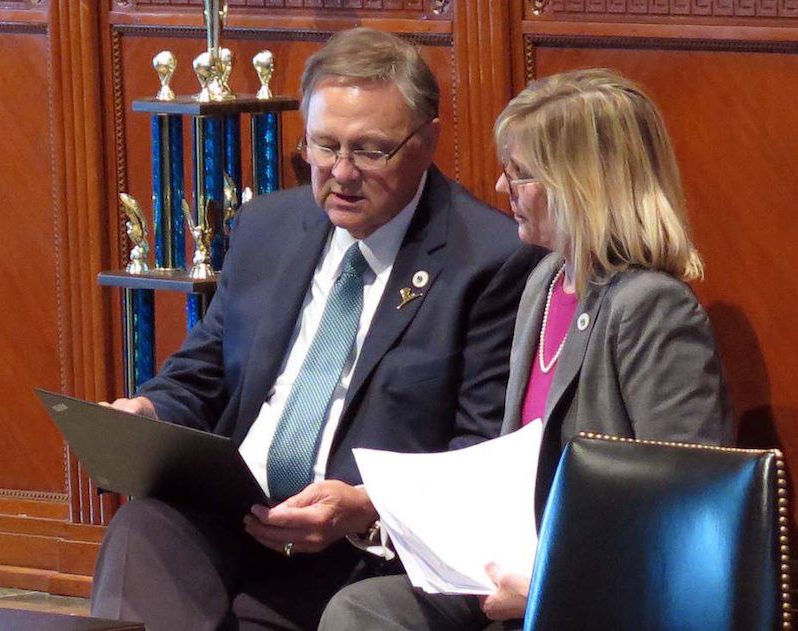 Photo courtesy by The Advocate

LA House Rep. Gene Reynolds and Nancy Landry at the legislative debate May 2016.

Two state lawmakers, one democrat and one republican, have filed bills that would mean higher GPA requirements for high school students looking to benefit from the most basic level of the Tayler Opportunity Program for Students (TOPS) scholarship.

The bills would increase the required high school cumulative GPA to 3.0 from the current 2.5 that is required for students to be eligible for the TOPS Opportunity award, which is the lowest level of TOPS offered.

ULM students have mixed reactions to the proposition. Some students feel that the increase is fair because it reflects the requirements needed to keep university scholarships once in college.

“I need a 3.0 to keep my scholarship. I think it’s only fair that high school students have to make a 3.0 to earn the scholarship,” Greg Sova, a sophomore atmospheric science major, said.

Sova is from Michigan and does not receive TOPS aid, but must keep a 3.0 GPA to maintain his ULM scholarship.

Others believe that the increase would encourage students to strive to learn more in high school.

“I feel like the raise in GPA will make students, no matter what the financial background, work harder,” said Hannah Heyl, a freshman medical laboratory sciences major.

Schools across the state also have different standards, said Mayberry.

“I graduated from a lower-income school with a 3.5. In college, I realized I was not a 3.5 student, but more a 2.5…My education and the standards I was held to were completely different when entering college,” said Mayberry, who attended Carroll High School in Monroe.

Others say the requirement may be too high for students who work hard but struggle with classes. Terrance Sampson said he wouldn’t have gotten help from TOPS had the requirement been a 3.0 when he applied to college.

Now, Sampson is a junior occupational therapy major who is on track to graduate and “doing great,” he said.

Although the bills are presented by separate parties, Reynolds and Foil plan to work together to try to pass the increase.

“If we are going to spend the money we are spending, I want excellence,” Reynolds said in an article by The Advocate.

Legislators have tried to strengthen TOPS requirements in the past, but changes were never passed. This time, the bills stand more of a chance because of the funding issues surrounding TOPS.

Last summer, a special legislative session left TOPS underfunded for the first time since its creation in 1989. At ULM, this means TOPS recipients received only about 48 percent of what they normally do from the program this semester.

If passed, the bills will apply to students who graduate from high school during and after the 2020-21 school year.