Walk a Mile in Her Shoes steps on sexual abuse issues 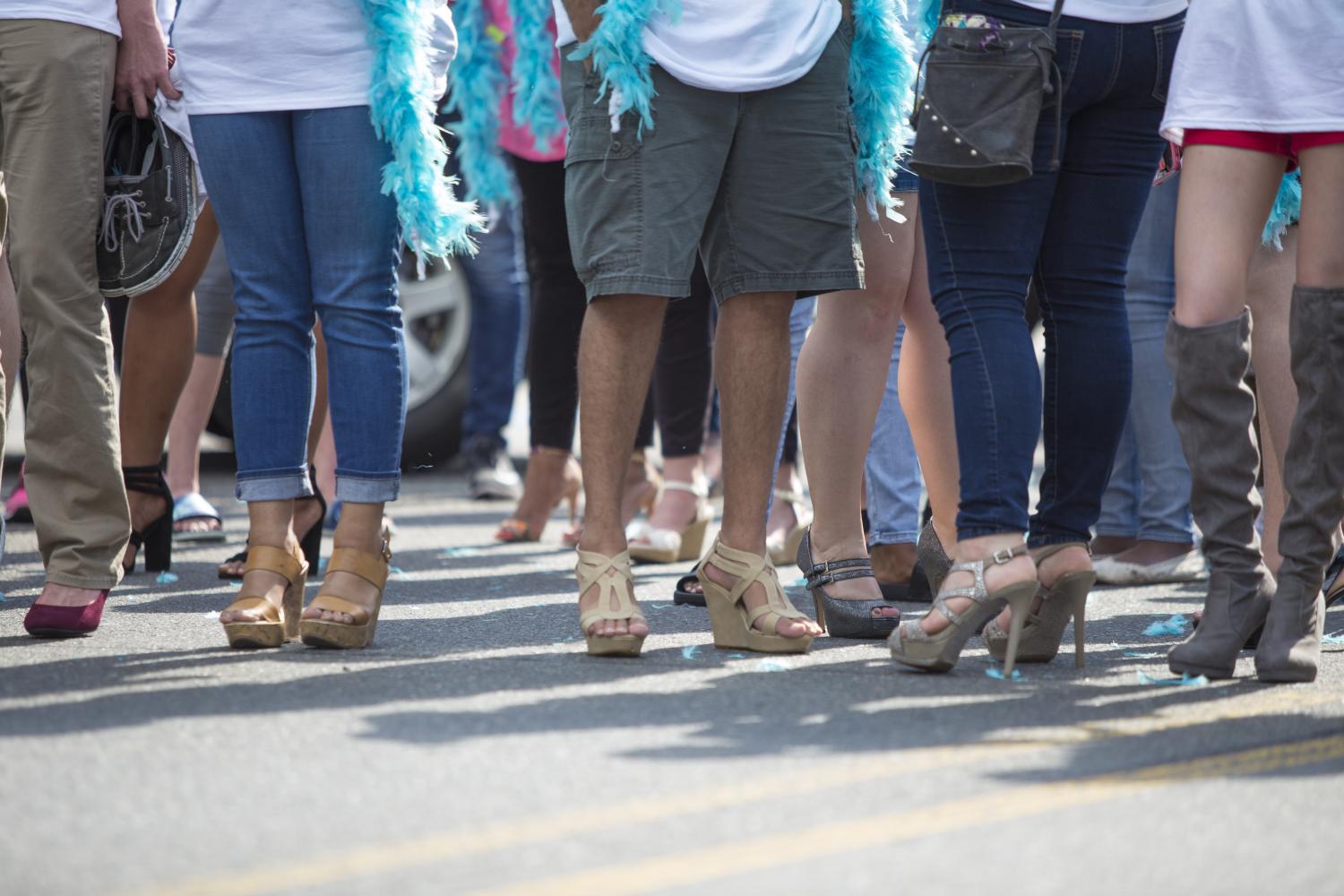 Male and female students strut their heels in this year's Walk a Mile in Her Shoes sexual abuse awareness walk. Photo by Siddharth Gaulee.

“Baby, I’m preying on you tonight, hunt you down eat you alive just like animals.”

Monika Taylor, representative of the attorney general’s office of Louisiana cited Maroon 5’s song “Animals” to be a rapist song in the event Walk a Mile in Her Shoes.

Keeping up the tradition that was started in spring 2016, the Femhawks and the Wellspring Alliance conducted the second Walk a Mile in Her Shoes. The event was sponsored by the CAB with the goal of bringing awareness to sexual abuse and those who survive it.

Taylor emphasized the sexual assault phrase “no means no” and said that a little twist in the phrase would make it clearer: “Yes means yes, everything else means no.”

She said, “No answer means no, passed out means no, too drunk to form a sentence means no.”

Junior kinesiology major Timothy Perkins had never worn heels before. In order to get a better vision of how women felt in heels, Perkins borrowed a pair and participated.

Walking back and forth across the Northeast Dr. bridge, he got a slight experience of how it feels to be inches above the ground and not in his tennis shoes.

“I realized after the walk that it wasn’t about just walking in her heels but it was how women feel on the day to day basis,” Perkins said.

It was not just the extrinsic pain of walking in heels that triggered Perkins. He was also touched by the intrinsic depth the event carried.

He said he found that women are underpaid in the workforce, deal with sexual harassment in the workplace and sometimes find themselves in abusive, life-threatening relationships. But they can find their way out by communicating with a friend.

Mayor Jamie Mayo tried walking in his wife’s heels, but could only take three steps. He said that it’s “tremendous to walk in the shoes of those who have been abused.”

Even though the event was drizzled with rain, the crowd did not disperse, for they were firm against sexual abuse.

Tegan Rogers, a ULM alumna, shared her story of being in an abusive relationship.

With tears rolling down her eyes, Rogers expressed that she ignored the “red flags,” even though she saw them. “Because I loved him, I kind of overlooked it,” she said.

Rogers said that her partner was very insecure, jealous and territorial. “He choked me, kicked me, hit me on my face and afterwards asked me to get the clothes I was wearing on a date and burned those clothes,” she said. “He made me watch him burn the clothes.”

Rogers’s partner threatened her to not leave him or else she would be killed. He hit Rogers so badly that she couldn’t identify herself in the mirror, and that was her breaking point. She felt if she didn’t get out, her son wouldn’t have a mother.

“There was a high possibility that he would kill me.”

Rogers shared her story to a friend who helped her to get through it. “I am standing here because I spoke to somebody,” she said. “If I hadn’t said anything, I would probably be in that situation or not be alive.”

The event ended with a candle light ceremony and a message to fight against sexual assault.