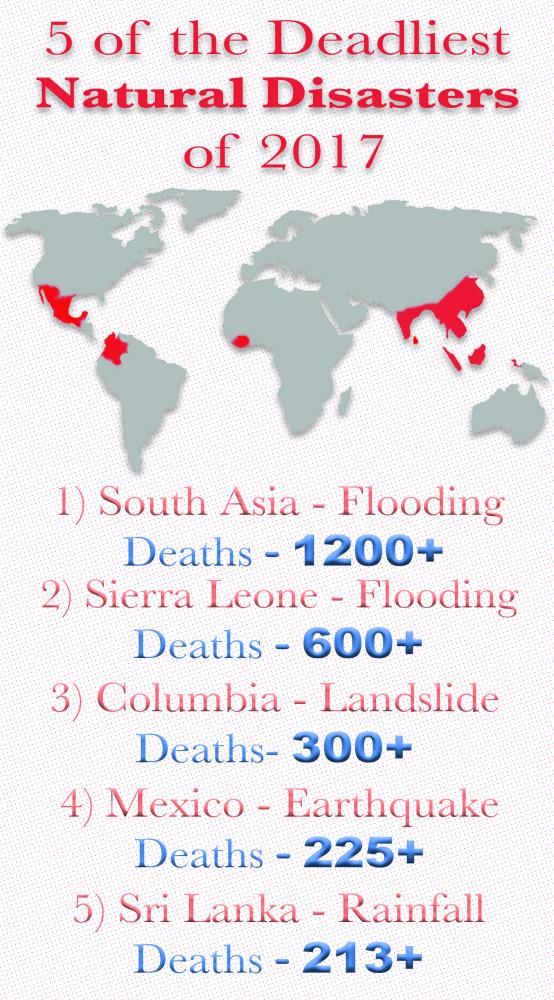 The year 2017 has been plagued with natural disasters. Hurricanes, earthquakes, fires, flooding it’s been an awful year for millions of people as they’ve had to endure some of the toughest moments of their lives. Most recently the island of Puerto Rico, a U.S. territory, was hit by Hurricane Maria. Also, the country of Mexico was rocked with their second and third major earthquake in a month’s time.

Mexico was the first to be struck. In just over a two-week period the country has been rocked with three major earthquakes all over a 6.0 in magnitude. The deadliest one happened on September 19. Mexicans use that date to remember those lost in the 1985 earthquake that saw over 5,000 perish. Few people expected a major quake on the anniversary of the 1985 earthquake. Shortly after 1pm local time the ground started shaking just southeast of Mexico City.

A 7.1 magnitude earthquake shook the country’s core. Buildings were toppled and chaos ensued. Schools filled with children fell. Electricity outages were reported all throughout the area and panic became widespread. When the dust settled, the Mexicans began to rise. After regrouping rescue attempts were started. Survivors were dug up from beneath the rubble and heroes were commended for their efforts. In total over 200 people died due to the September 19 earthquake. Mexico is still mourning the loss of lives, but it hopes to rebuild and avert future catastrophes like this one.

“I wasn’t able to communicate with them for two days,” Ms. Vanelis Rivera is an English professor at ULM from Arecibo, Puerto Rico who’s also lived in the US Virgin Islands. It took her two days to hear from her family after Hurricane Maria hit the Caribbean.

After Mexico’s earthquake, another natural disaster put the world at notice, Hurricane Maria. Puerto Rico and the Caribbean islands were struck by Hurricane Maria on a Wednesday morning on September 20. Heavy rain and 155 mph winds plummeted the islands. The whole island of Puerto Rico lost power. The island was left flooded and without much assistance. A week after the events aid has yet to fully reach the Puerto Ricans. Many are in desperate need of medical attention and water. Over three million people are still without electricity and clean water.

“They still don’t have power or water,” Rivera’s family lives about one hour away from San Juan, the island’s biggest city and capital, and according to Rivera and her family aid has reached Puerto Rico but it hasn’t reached many people.

Senior Kinesiology major and CAB vice-president Edward Raimundi has property in Puerto Rico left to him by his late father. The storm severely damaged his property. “It hurts a lot not just because of the damage but what the property meant to me,” Raimundi feels for the people around the world affected by natural disasters. “It’s a beautiful island (Puerto Rico) and has to be restored to its old greatness.”

“When tragedy occurs that’s the opportunity to see people as people and help without any condition,” Rivera’s message to those affected is that of unity and neighborly love, “Whoever needs help gets help, it doesn’t matter who you are it’s just a quick response to people’s humanity.”