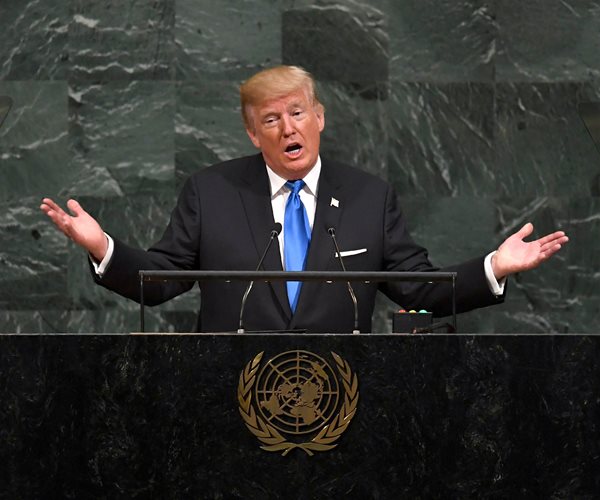 For his first speech at the United Nations, President Donald Trump highlighted some of the international dangers the world is facing. Trump called out the nations of North Korea and Iran in his speech in his speech to over 100 world leaders.

Though the speech highlighted countries the President found to be disruptive, he decided to first talk about the devastation the United States has been facing due to recent hurricanes. This call to attention of the dangers faced by American people echoed as Trump talked about the threats to nations worldwide by criminal organizations and terrorists.

While the beginning of Trump’s speech may have been jarring to some of the word leaders in attendance, it could also be a good eye-opener.

“I think the beginning of his speech was most important because I felt like he needed to say something to make the people want to listen to what he had to say,” said Tyler Johnson, a senior journalism major.

The speech quickly turned to focus on the United States as Trump spoke of the sacrifices of Americans to keep their nation free. In keeping America free, Trump pointed out the refusal of Americans to expand their territory or force other people to live by American standards.

This transition moved Trump into a more serious tone of calling out aggressive nations.

“The scourge of our planet today is a small group of rogue regimes that violate every principle on which the United Nations is based,” Trump said. “They respect neither their own citizens nor the sovereign rights of their countries.”

Specifically, Trump called out North Korea in his United Nation’s speech. He mentioned the capture of American college student Otto Warmbier, who died shortly after being returned to the United States, and the killing of the brother of the nation’s leader at an airport.

Trump further fueled the fire at the assembly by calling Kim Jung-Un, North Korea’s dictator, Rocket Man, in reference to the numerous ballistic missile tests the nation has been testing this year. Trump said the only way for North Korea to continue as a nation is too dismantle their nuclear arsenal.

Meagan Neighbors, a senior digital media production major, was not impressed by Trump’s boast of power.

“I don’t think anyone respects President Trump more now after his speech. He stated what everyone knows, that we are fully capable of destroying North Korea,” Neighbors said. “He did nothing to try and bring peace to the situation; [he] only added fuel to the fire.”

Trump’s solution to these “rouge nations” was for other nations to become more active. He called on nations to look to the past for the patriotism they once had.

“Now we are calling for a great reawakening of nations, for the revival of their spirits, their pride, their people, and their patriotism,” Trump said.

The message ends with a call of sacrifice by nations who would stand together for peace. Through peace and dignity, Trump sees a better planet for humanity to live on.