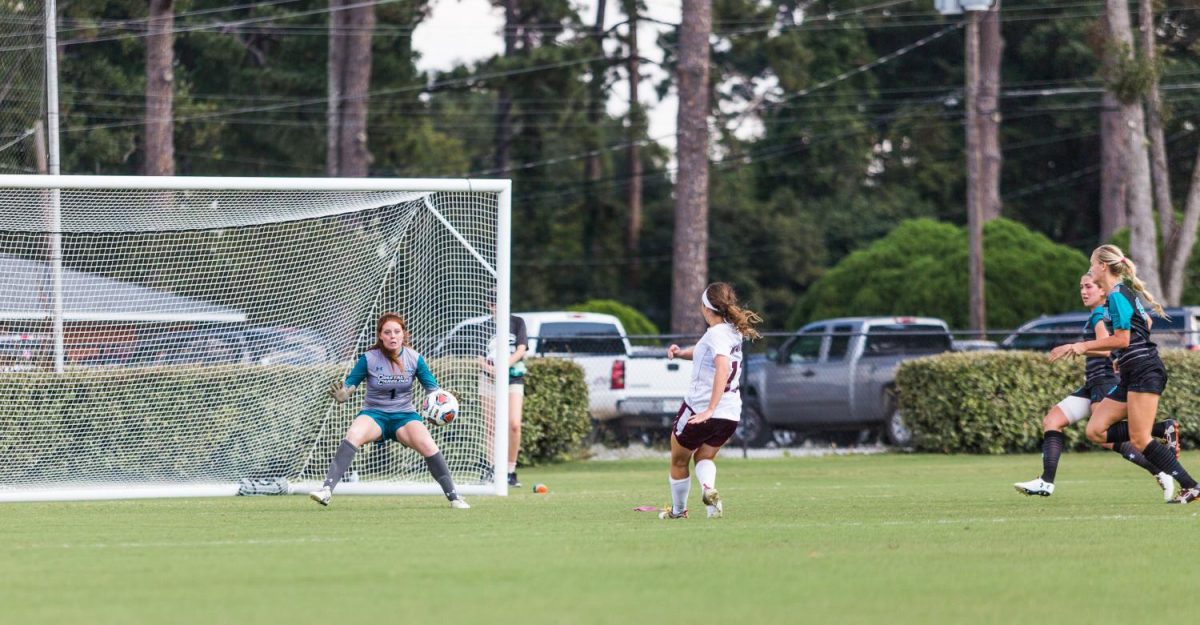 It was suns out talons out Sunday afternoon at the ULM Soccer Complex as the Warhawks defeated Coastal Carolina 2-0.

The Warhawks, now (1-10-1) achieved their first win of the season in conference play with an impressive overall display.

The Warhawks also scored for the first time in conference play, having last scored in their last non-conference game of the season. Junior goalkeeper Brooke-Lynn Scroggins recorded her first clean sheet of the season.

Head coach Keyton Wheelock said, “We needed this one, but it means nothing if we don’t go out and put a performance out next week.”

Wheelock is hopeful this victory signifies a change for their season.

The game against Coastal started even, ULM enjoyed heavy stints of possession throughout both halves.

Senior midfielder Danielle Sabathe capped off a string of impressive performances with her first goal of the season.

Getting the ball just outside the box on the left side, Sabathe caught the opposing keeper out of place. She took the shot which dipped down under the crossbar for goal.

“The keeper was off her line and I caught her,” after scoring Sabathe immediately ran to the bench. “I figured this is a huge time to go over there; our saying is team first, and I wanted everyone on the team to celebrate with me.”

The second half was even better for the Warhawks. ULM controlled play throughout the second half and created multiple chances. Although failing to capitalize on many clear chances, the Warhawks got their insurance goal thanks to freshman forward Taylor Altieri. Altieri got the ball in the box one-on-one with the keeper and blasted the ball in for goal.

“I couldn’t have gotten that ball if it wasn’t for Mia Walters,” Altieri remembers what was going through her head when she scored. “Whatever you do, just shoot it into the corner.”

After the game, head coach Keyton Wheelock, was full of praise for her team saying, “We have not been able to put together a full 90 minutes, but we did today.” She also stressed the fact that they still have more games to play.