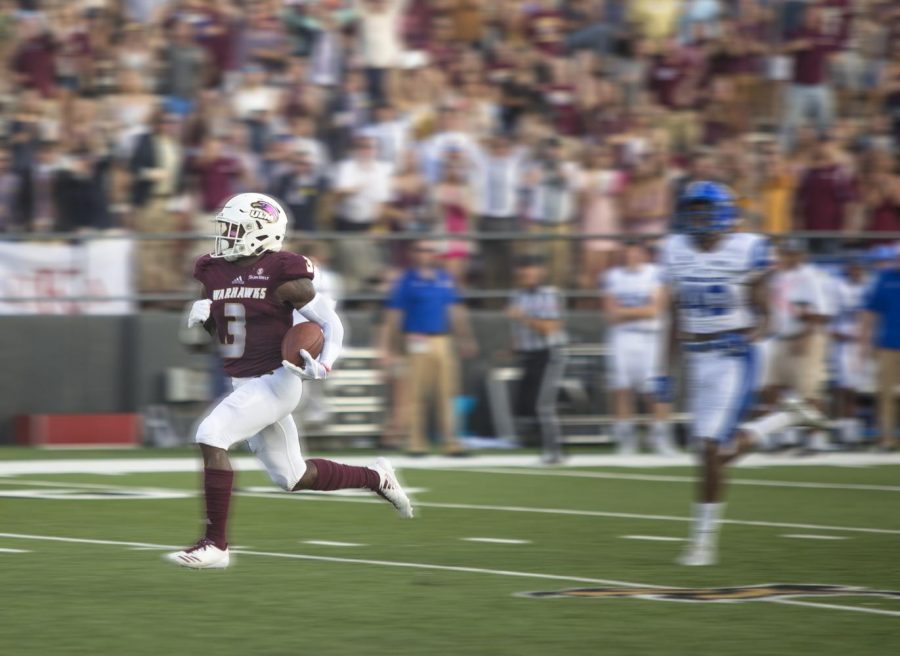 The Warhawks got behind ear- ly, and a late push at the end of the game wasn’t enough. The Panthers dominated ULM offensively on their way to a 47-37 win. The War- hawks are now 3-3 overall and 3-1 in the Sun Belt.

“I’m disappointed in our ener- gy level,” head coach Matt Viator said. “Special teams looked good for most of the game, but we didn’t have the drive to win this game.”

The opening drive for the War- hawks stalled after coming up short on third and short. Georgia State quickly scored on a six- play, 77- yard drive on a 50-yard touchdown pass. Junior receiver Marcus Green scored on the ensuing kickoff, rum- bling 93-yards for a touchdown.

The Warhawks led 7-6 after one offensive possession. Georgia State’s offense found its groove early by scoring on a 69-yard touchdown pass to put them up 13-7 with nine

minutes to go in the first quarter. The Warhawks started their second offensive drive of the game. ULM got into a fourth down situation that resulted in intentional grounding by the offense, moving the Panthers to midfield.

The Warhawk defense showed some toughness, forcing the Pan- thers into a three and out. The punt put ULM in a tough position to start its third drive on their 1-yard line. After a 13-play, 79-yard drive, the Warhawks capped it off with a Craig Ford field goal, but they still trailed the Panthers 13-10.

In the second quarter, the War- hawks started to fall apart.

The Panthers took over the game by scoring on an eight-play, 78-yard drive running through the War- hawk defense.

Georgia State was making the game look easy as they forced an- other three and out.

“We need to come out and have the mindset of getting a stop in the first half, but there is no excuse. We have to come out and be ready to give our offense a chance to put

points on the board,” said junior linebacker David Griffith.

In the second half, the Panthers kept their foot on the gas pedal as they scored on a 25-yard touch- down pass to increase their score to 33-10 with six minutes left in the

third quarter. The Warhawks need- ed a spark on offense to get back into the game.

Down by 23, ULM looked to ju- nior quarterback Garrett Smith to lead the offense. On his first posses- sion from scrimmage, Smith threw a pin-point 80-yard touchdown pass to Marcus Green to make the score 33-17.

The Warhawks looked to feed off the momentum produced by the quick touchdown.

Georgia State marched down the field and scored on a 22-yard touch- down pass capping off a four-play, 75-yard drive.

ULM gave a courageous effort to get back into the game, but it was too little too late. The Panthers kept a safe lead throughout the game and closed out on an impressive win.

Up next for the Warhawks is an- other conference matchup on the road against South Alabama. Kick- off is scheduled for 4 p.m. and will be streamed on ESPN 3.