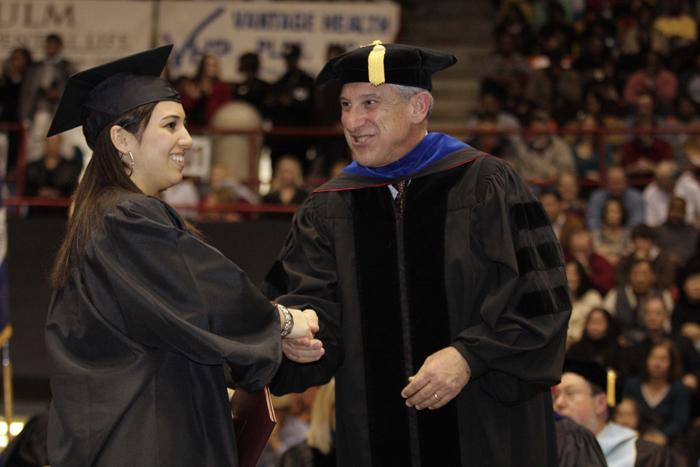 FANT-EWING COLISEUM – Less than two months into his tenure as the new leader of the University of Louisiana at Monroe, ULM President Nick Bruno recognized the awarding of 633 degrees to both fall and summer graduates during ULM’s 2010 Fall Commencement, held at 2 p.m., Dec.18, in Fant-Ewing Coliseum.

Before the graduates were handed their diplomas, Bruno delivered a keynote speech in which he implored the students to follow the lead of the thousands of excellent ULM alumni who preceded them. Bruno recognized the graduates for having reached a significant milestone and achieving a goal set years ago.

He said that each student who had gathered on Saturday had a different life story that had brought him or her to that moment, and he highlighted a few examples of the diversity of student stories to be told.

The audience applauded ULM’s “glitter guy,” who supported the Warhawks at every football game even as he helped raise almost $100,000 in ULM’s name for St. Jude Children’s Research Hospital.

Bruno also acknowledged another student from West Virginia whose grandmother served on the ULM faculty with distinction for years, as well as a non-traditional student who became a member of a National Honor Society for Psychology majors and who plans to pursue a master’s degree in Mental Health Counseling.

“Your stories are different, but the differences among you do not overshadow the fact that you have in common what brought you here today,” he said. “That includes setting an initial goal of attaining a college degree and a commitment to doing the necessary work to reach your goal.”

The new president said that during his first six weeks at ULM, he had met with many members of the greater university “family,” and each shared recollections or a favorite ULM experience with him.

“The common link is they all have a profound love and commitment to our beloved university,” Bruno said, adding that the conversations had sparked within him the realization that all stood on the shoulders of those who have gone before.

“I have assumed responsibility for this institution, which was built by many and led by the seven presidents who preceded me,” he said. “It is true that we live in challenging times for higher education and for ULM. But, so too, did those who preceded us.”

Noting that ULM began during the Great Depression, one of the most difficult financial periods in our nation’s history, Bruno pointed to the high hopes students and families had even then for achieving greater things for themselves. That first class totaled 416 students seeking higher learning and a better life for themselves and their families, although less than 100 had been expected to enroll, according to Bruno.

“Two years later the first commencement was held and 135 students graduated,” said Bruno, adding that he was honored to have recently met with a student who was a third generation graduate of ULM and whose grandmother was a member of that 1933 graduating class.

Bruno outlined the progression of a few of the seven presidents who preceded him, including the institution’s first president, C.C. Colvert, President Emeritus George T. Walker, and Dr. James Cofer, who was Bruno’s immediate predecessor.

“As ULM’s newest president, I too, will face challenges, as my predecessors did before me. I must draw upon their wisdom, their strength, and their resolve and maintain their excellence,” he said.

The president urged ULM’s newest graduates to realize that they, too, “stood on the shoulders” of the thousands who preceded them, including notable ULM alums that include Disney’s Vice President for Imagineering Jack Blitch, William Pryor, who became Alabama’s Attorney General, the youngest in the nation at that time, and Joe Profit, a first round draft pick by the Atlanta Falcons, who later became the founder and CEO of Multimedia Digital Corporation in Atlanta.

“Your story is still unfolding. Commencement is not the end, it is only the beginning,” Bruno said. “Just as you did when you began your work at ULM, you will again make sacrifices … Only you can measure the extent of your successes and build on the lessons you learn along the way.”

Bruno concluded, “Dr. Colvert said to your predecessors, ‘I think you can, and I believe you will.’ I say to you as you begin the next stage of your life, I know you can, and I am sure you will.”