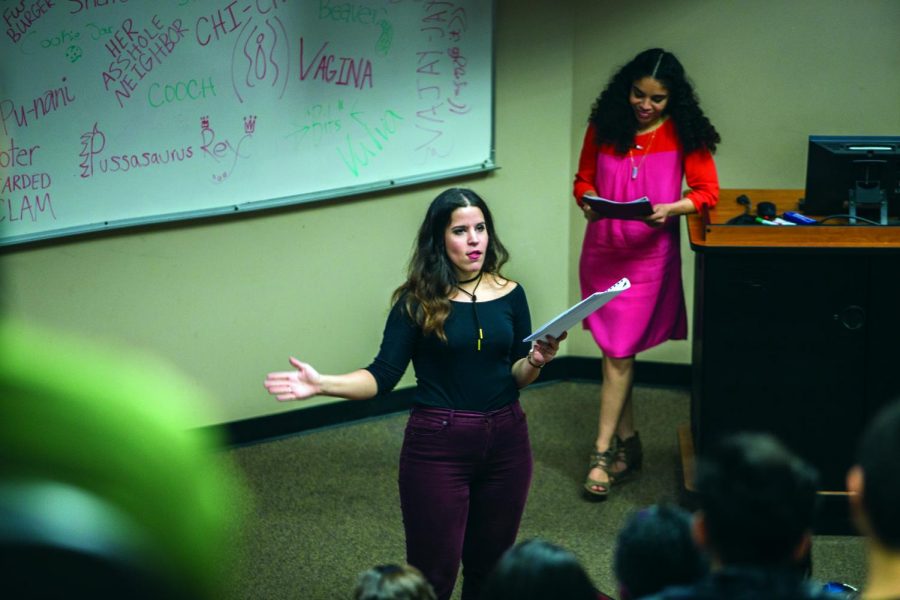 UNTIL THE VIOLENCE STOPS: Rebekah Barnes (left) performs “Because he likes to look at it” along with Vanelis Rivera.

“Vagina. Vagina. Vagina.” The word rang through the room, but it was still met with some hesitance. However, at the end of The Vagina Monologues last week , even men like Vu Nguyen are now more familiar with the word and femininity, in general. The seventh annual event was hosted by the School of Humanities and V-Day, a global non-profit organization.
Senior pre-pharmacy major Nguyen attended the event as part of a bonus assignment but now happily recommends it to everyone. “I finally understand that The Vagina Monologues is about women being more open to talk about something that they were afraid to talk about,” Nguyen said.
According to Nguyen, people who haven’t been raped won’t truly understand the struggles of a rape victim, but the performance tried to “bring to the forefront a glimpse of what rape is like.”
The ULM team was selected through auditions and had many returning actors from previous years.
“Our cast Tuesday night was composed of faculty, staff and students. Out of that cast, eight of us have dealt with harassment, and seven of us have experienced sexual assault,” said Rebekah Barnes, a second-time performer.
One of the monologues performed by Barnes was, “The Flood.” The performance told the story of a woman who had stopped addressing the existence of her vagina due to an apparently embarrassing sexual experience during her youth.
“It’s always very hard to discuss difficult and sensitive issues that carry social stigmas, like rape and abuse, to a diverse group of people who do not all share the same viewpoint, but I think that’s why The Vagina Monologues are so important,” Barnes said.
For junior accounting major Prakriti Paudel, the event allowed her to openly enjoy a conversation about vaginas without the usual embarrassment.
“A lot of the stories in the performance included real events with real people. This made me realize how important it was to aware everyone on the importance of female rights,” Paudel said.
Paudel grew up in an environment where talking about vaginas, in general, was against the culture. The event last Tuesday was a “once in a lifetime, unique experience” for her.
Tony Award winner Eve Ensler put together the performance by interviewing a series of women from different ages, races and backgrounds. The Vagina Monologues is part of a global movement that advocates against violence against women.
Admission to the event was donation based. All the proceeds went towards The Wellspring and V-Day, who provided the script. The Wellspring is a non-profit organization that helps families and survivors of domestic violence in Northeast Louisiana.