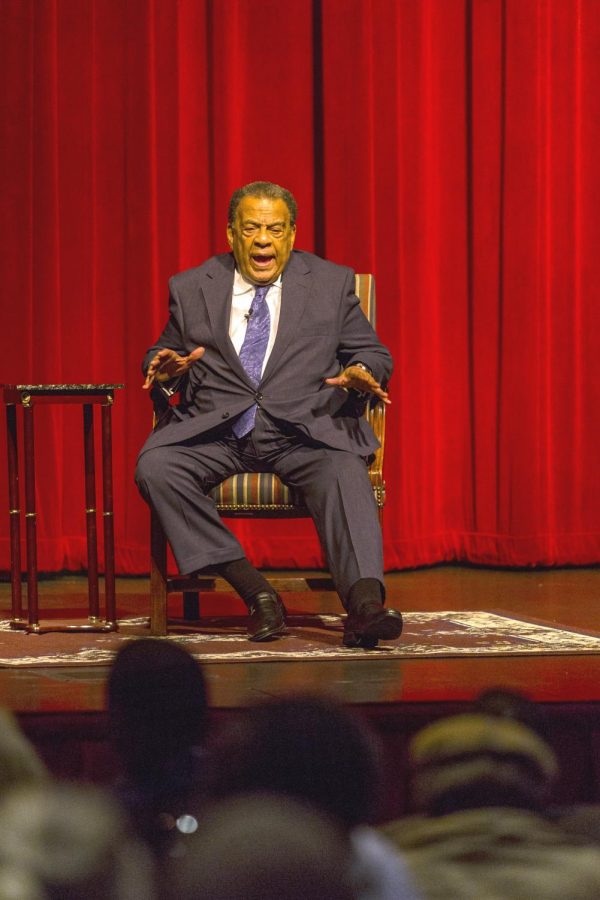 It’s not everyday that college students get to meet Martin Luther King Jr.’s best friend.
Students had the chance to listen to the former mayor of Atlanta, Civil Rights Activist and former U.S. Ambassador, Andrew Young Jr.
“I want to learn to live together as brother and sister, than perish as fools,” Young said as he spoke to a crowd about the Civil Rights Movement.
“I wanted to come to this event, especially during times like this where there are racial tensions and listen to someone who has a perspective on seeing both sides,” sophomore political science major Isiah Chavis said.
The crowd listened intently as he shared how millennials are fighting injustice now.
“Right now, the greatest challenge is to determine a narrative,” Young said.
“Back then, we had a story, and we knew where we were going. Right now, nobody has a story that makes sense to me,” Young continued as he compared the past and present.
Young talked about his faith in God, revealed how Dr. King was a comedian behind closed doors and not understanding the fuss surrounding Black Panther.
He met Dr. King after joining the Southern Christian Leadership Citizenship school program.
He took over Dr. King’s role whenever King went to jail. He helped create the Civil Rights Act of 1964 and the Voting Rights Act of 1965. Young was also with Dr. King in Memphis, Tennessee, when he was assassinated.
Students like sophomore political science major Mykola Khavruck were grateful to have a “living legend remind us no matter what’s going on now, things in the past were far worst.”
One of the people he admired the most was his grandmother. She taught him not to fear death.
He knew that some of his Civil Rights campaigns in Birmingham and Selma, Alabama could cost him his life along with his confidants, yet he still risked it for the right to equality.
Young first got involved with the Civil Rights Movement while living in Georgia.
While in Georgia, Young was a pastor and organized many voter registration drives.
He ran for Congress twice and was elected to the House of Representatives after his second run.
“The continuing fight for freedom, equality and social injustice are still going on today,” senior secondary education history major David Watson said.
After being appointed as the U.S. Ambassador to the United Nations, Young said learning how to cooperate with people and understanding objectives were the keys to successfully being an Ambassador.
President Jimmy Carter awarded Young the Presidential Medal of Freedom in 1981.
Young credited God for leading him in the right direction.
“My life has been a series of spiritual accidents. I never know what happens until it happens,” Young said as he jokingly spoke about meeting his wife and the many other events that occurred throughout his life.
Students felt his visit was insightful and inspirational.
Sophomore pre-medical laboratory major Zekeedra Long learned the importance of being kind after hearing Young.
“Kindness should be something that everyone should strive to express throughout their lifetime. In a world full of hate, the least we can do is be kind to one another,” Long said.
President Nick Bruno attended the lecture and found it important for good leaders “to know the leaders of the past and what they went through and what they learned on how to make changes.”
President Bruno remembered being a young man in the Civil Rights era and was inspired, like so many in the audience, to hear how they politically brought change.
“I’ve got a feeling everything’s going to be alright,” sang Andrew Young Jr. and the audience to end his lecture.