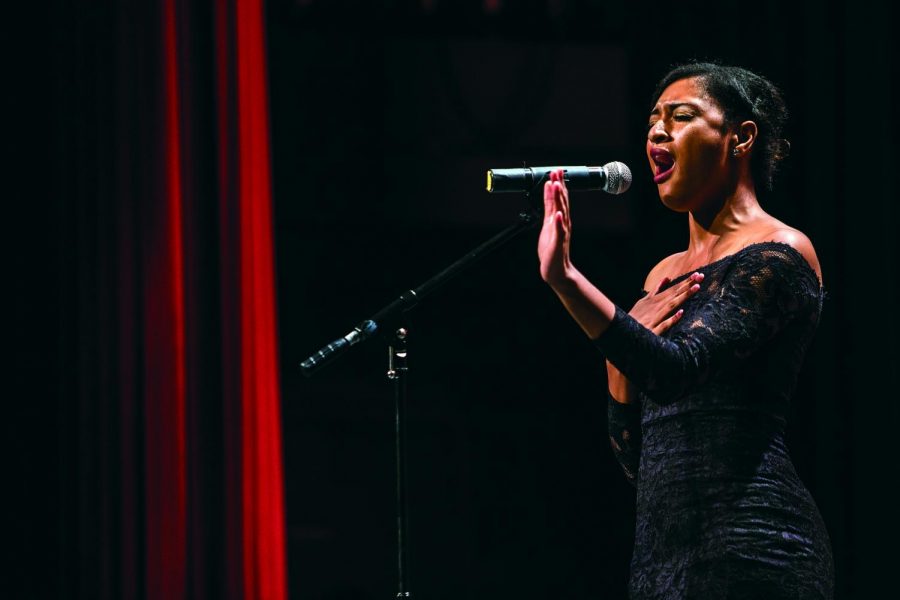 De’andra Lemalle was greeted with an auditorium filled with cheers as she performed at the annual ULM’s Got Talent last Thursday. Psychology sophomore Lemalle bagged the first prize with her performance of “All I Want” by Kodaline.
Along with Lemalle, there were 13 other participants at the annual talent show organized by the Campus Activities Board (CAB). Attendees enjoyed a wide range of talents like rap performance, playing a violin while riding on a unicycle and sign language performance of a song.
Lemalle first participated at CAB’s mini-talent show during the men’s basketball game. “I went to the mini- talent show thinking that it was the auditions and later realized that it was a talent show itself. I freaked out,” Lemalle said.
However, the vocal sensation ended up winning the mini-talent show. She said that she was nervous to perform at the mini-talent show because she had never performed on a basketball court before that day.
This year’s talent show also had an active participation from the audience. Hosts Ahmaad Solmone and Alberta Green encouraged the crowd to participate in an on-stage dance-off and sing-off.
Participants had to dance to Lil Pump’s “Gucci Gang” for the dance-off, which had the entire crowd roaring with laughter. Winners of the audience round were chosen through crowd response and were awarded hugs, fist bumps and handshakes.
Last year’s audience round participant, Annmarie Cash, competed in the actual talent show this year and bagged the third prize with her performance of Adele’s “Rolling in the Deep.” Cash shared that her friends encouraged her to audition for this year’s talent show after her on-stage performance last year.
Nursing freshman Erin Wade’s favorite performance was “The Arthur’s” theme song performed by Onyedikachi Eke, a pharmacy doctorate student.
“It made me feel nostalgic, and I sang along. I think the performer really engaged the crowd,” Wade said.
According to Eke, he chose the song taking into account the current political climate. “Everyone seems to talk past each other, with no one really listening. So I just wanted to remind us how nice it can feel when we cooperate with our neighbors,” Eke said.
Although he grew up around music his entire life, it was Celine Dion’s “My Heart Will Go On” that inspired Eke to take up singing. Eke bagged the second price at the talent show.
The top three performances were awarded cash prizes by CAB, with the first prize being $400. The performances that won the judges’ hearts and made it to the top three were all vocal performances.