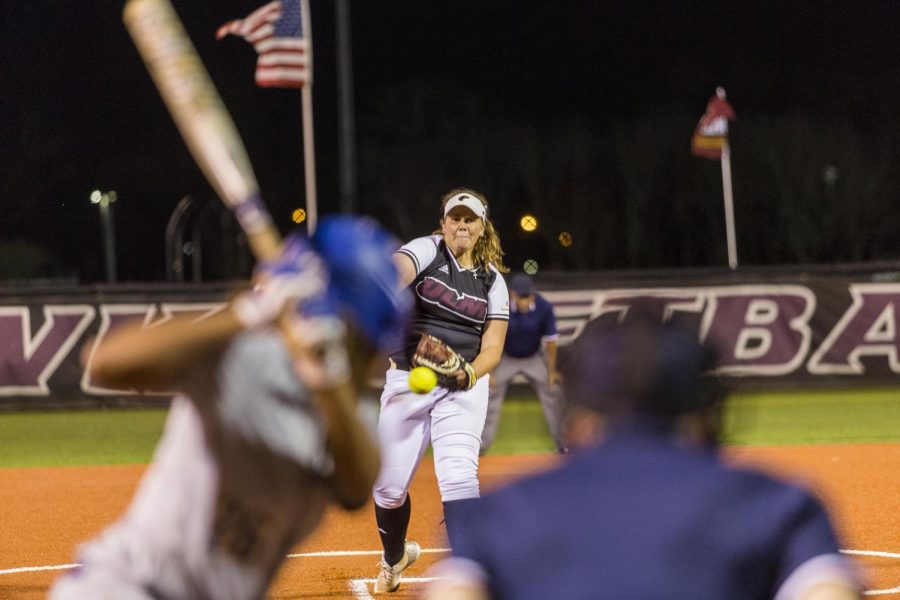 A two-run homerun in the third inning proved to be too much for the Warhawks as they lost to No. 23 McNeese State 2-0.
The offense wasn’t clicking as the Cowboys pitching staff held ULM to only three hits the whole game.
The Warhawks only gave up seven, but the crucial homerun was the story of the game.
It came early, and ULM could have made a comeback, but McNeese kept making plays on the defensive end.
“We knew we would be facing a very talented team tonight,” head softball coach Corey Lyon said.
“I take a lot better than bad out of this game, and I’m looking forward to getting back on the diamond this weekend in Memphis.”
The McNeese pitcher continued her dominance, she is having a great season. After this game, she is now (6-2) on the season.
She posted five strikeouts and closed out the game for the win.
“McNeese’s pitcher did a good job at keeping us off balance.
She was able to move the ball really well and kept us from getting anything going at the plate,” Lyon said.
In their next game, the Warhawks made a dramatic bounce back.
With the players in the dugout celebrating and senior Rochelle Edwards crossing the plate, the Warhawks defeated Bradley with an RBI.
Sophomore Jessie Watts stepped up to the plate and recorded her first RBI of the season and it came at the best time.
The eight innings would tell and end the story of the game sending Bradley home in shock.
This win moves the team to (9-4) on the season. In their last six games, the Warhawks went (5-1) with their only loss coming against McNeese.
Rochelle Roberts showed her experience as she lead the team to this gutsy win.
In the second inning, she notched a single.
Then, she hit a double in the next inning. Roberts improved her at-bats as the game went on. She went 3-4 in the game.
After scoring three in the third, ULM went cold from the fourth through seventh innings.
The three hits ULM gave up were solo home runs for Bradley, but the Warhawks recovered.
“Sydney and Rochelle were clutch today and I am extremely proud of Sam and Jessie for coming into the inning and getting the job done,” coach Corey Lyon said.
They finished their three game series with a 7-0 win agasint Fort Wayne.
Senior Hunter Hogan went 3-4 at the plate and brought in two RBI’s. ULM is now 10-6 on the season.
The Warhawks will finish their Memphis tournament and then travel to Boone, N.C. to start conference play against App. State.
Their next home game is Saturday, March 17, against Troy at 1 p.m.