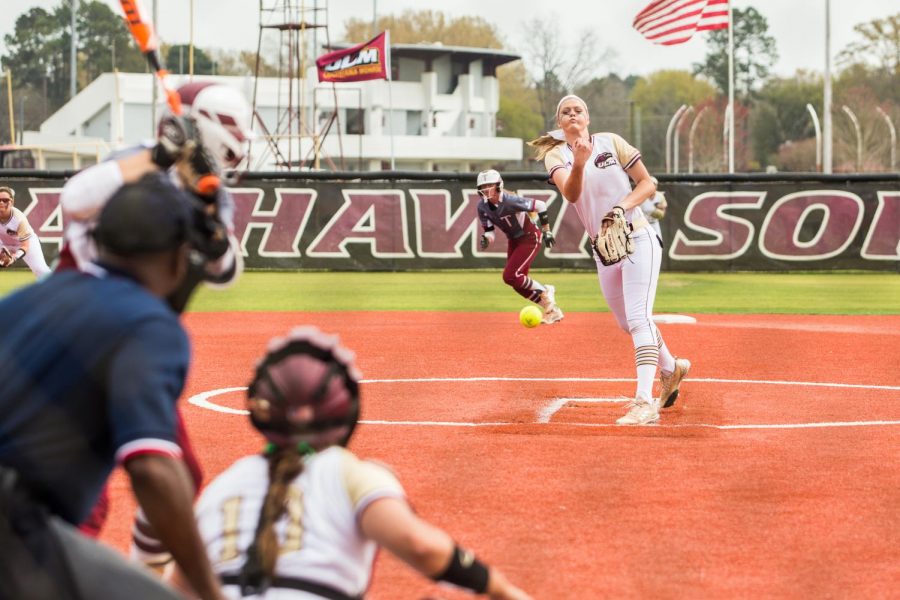 The Warhawks couldn’t get their big bats rolling for their conference double header against Troy Saturday afternoon.

ULM put up a fight but lost both games at home. Batting and pitching struggles, along with costly errors, proved to be the deciding factor in both games.

The Trojans got on the board first after a throwing error and a wild pitch pushed their runner into scoring position. A sacrifice fly advanced the runner across the plate in the top of the second inning for the Trojan’s first lead of the game.

Despite ULMs hot bats early in the season, the Warhawks just weren’t connecting on any pitches.

The first hit for ULM didn’t come until the third inning of Saturday’s first game of the double header. Outfielder, Rochelle Roberts, singled to center, but a ground out to first ended the inning, stranding a runner on.

A great pitching display from the Warhawks in the middle innings of game one kept things close, but their lack of hits caused them to be held scoreless for the game. The Trojans picked up their second run in the final inning of Saturdays opener, making the final 2-0.

ULM looked to immediately bounce back, playing the Trojans again, but much like the first game, the team couldn’t connect on any pitches.  After falling to a 3-0 lead, the Warhawks did manage to get on the board in the fourth inning.

A single through the left side by junior cathcer Brie Wrobel who drove in senior outfielder Hunter Hogan for the Warhawks first score of game two, 3-1. But the two run gap wouldn’t last long as the Trojans answered in the sixth.

They scored four runs, including their second homerun of the game to make the score 1-7.

The Warhawks managed to pick up two of those lost runs back in the the bottom half of the sixth. Hogan and Wrobel crossed home plate to make the score 3-7 before the Trojans had their best inning of the day after ULM’s pitching went down the drain.

ULM’s pitching plunders helped Troy put together a seven-run final inning including a huge grand slam to left center field that pushed the score out of reach, 3-14.

The two games mark the Warhawks tenth and eleventh losses to push their season to an even 11-11. Up next the Warhawks will travel to Georgia Southern to face off against the Eagles in a three game road series.

The first two games are being held in a double header Saturday, March 24 at Eagle Field. First pitch times are set for 12 p.m. for game one and 2 p.m. for game two.