Marching for our lives, future 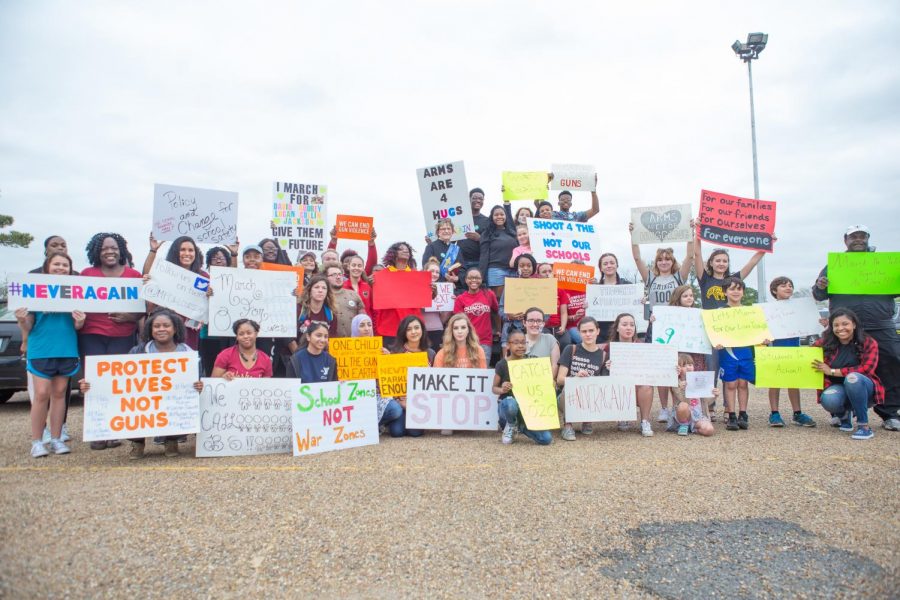 There is strength in numbers. That is the saying that drew people out Saturday morning for the “March for Our Lives” event outside the Monroe Civic Center.

Graduating seniors from the ULM social work department joined forces with students from Neville High School in Monroe and gathered early Saturday to voice their opinions regarding rising gun-related violence happening in schools throughout the country.

“This march coincided perfectly with our service project for Dr. Savage’s class in which we held a panel on behalf of the ULM Social Work department, ULM Police department and Monroe Police department to discuss procedures and trainings that have taken place in order to keep us all safe here at ULM,” Portillo-Segovia said.

Marches like the one in Monroe went on around the country.

In Monroe, the march became a rally due to the potential of bad weather.

Cassidy Kunicyn, a senior finance major went with Portillo-Segovia and other ULM students.

“I went to the event because I feel very strongly for gun control. I’m from Canada, a country that has gun control and I’ve seen it work. Not saying we’re perfect, but gun control has still helped. I just wanted to see how many people were going to show up,” Kunicyn said.

Another distinguished guest at the event was Monroe Mayor Jamie Mayo.

Mayor Mayo spoke in front of those gathered at the march and even took it upon himself to speak to a concerned high school student from Neville about a safety concern that the student said wasn’t handled properly.

“It was very important to come out and support our kids as they march for their lives because that is a serious issue across America and as a parent and grandparent myself we all are concerned about our kids,” Mayo said.

The crowd gathered outside the civic center was predominantly young women.

Girls like Sahar Yusuf, a junior from Neville High School, said by rallying in such high numbers nationwide lawmakers will have to take notice of the issue at hand.

“What brought me out today was the daily injustices I see on the news every day. The gun violence epidemic is growing stronger, and I feel like the voices of students, activists and families these voices will surely help eliminate this epidemic or bring to light the problems that we are facing,” Yusuf said.

While official numbers haven’t been released, it’s estimated that thousands of people marched on Saturday nationwide.

Celebrities like Paul McCarthy and politicians like former Vice-President Joe Biden also joined in on the march.