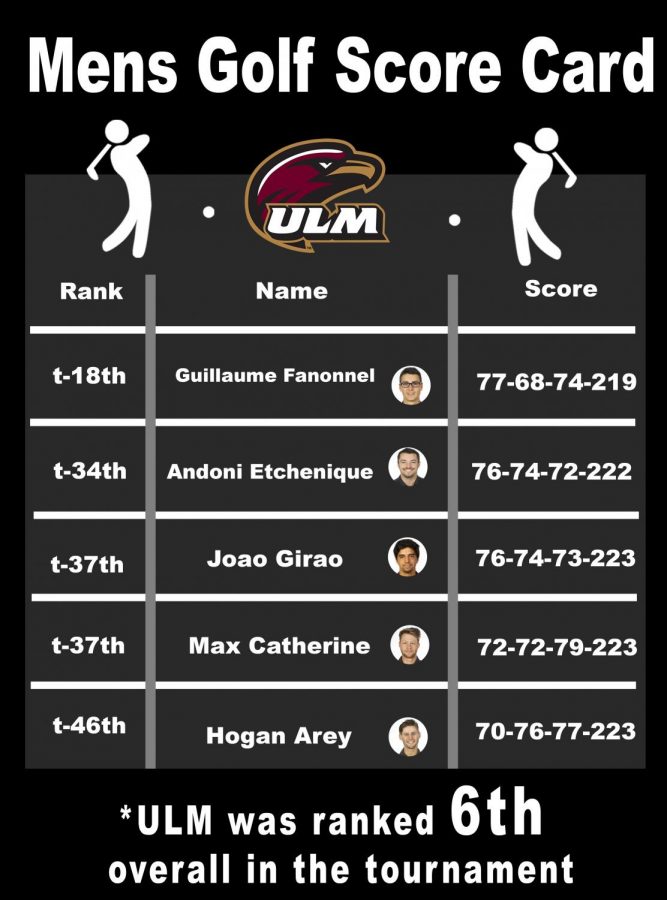 ULM men’s golf has been on fire lately, getting their eighth top-10 team finish of the 17-18 season on Tuesday.

Placing sixth and finishing with an 8-over-par in the final round of the Lone Star Invitational, the Warhawks boasted an overall two-day score of 12-over-878 (294-288-296) at the Briggs Ranch Golf Course in San Antonio.

“Overall, it was a pretty good week for the guys,” ULM head coach Tim Baldwin said. “We beat several teams inside the top 100, but it was a bit of a struggle today.”

“Our next event is the Mystic Creek Match Play next Sunday (March 25) against Louisiana Tech, Arkansas State and Little Rock.

This will be a good tune-up for the conference championships later in April.”

The Warhawks had good performances all around. Sophomore Guillaume Fanonnel led the way, picking up ULM’s top score of the tournament.

He finished with an impressive 3-over-par 219 (77-68-74) for a six-way tie for 18th place. Fanonnel managed to keep pace with the tournament winner, Oklahoma’s Brad Dalke, finishing only 11 strokes behind him.

Another big performance came from sophomore Andoni Etchenique, who picked up the lowest final-round score of any Warhawk Tuesday afternoon with a six-over-par.

He also managed to finish in a three-way tie for 34th overall to boost ULM’s team score. Sophomore Joao Girao finished just behind Etchenique after making the second largest jump of the day. He climbed thirteen spots to finish 37th overall. He finished with a seven-over-par and a score of 223 (76-74-73).

The Warhawks will tee off next at the Gary Koch Invitational, whch will be held on Monday and Tuesday, April 9-10.

The Warhawks will look to pick up their eleventh top-10 team win on the season. The tournament will be held in Gastonia, North Carolina, at the Gaston Country Club.