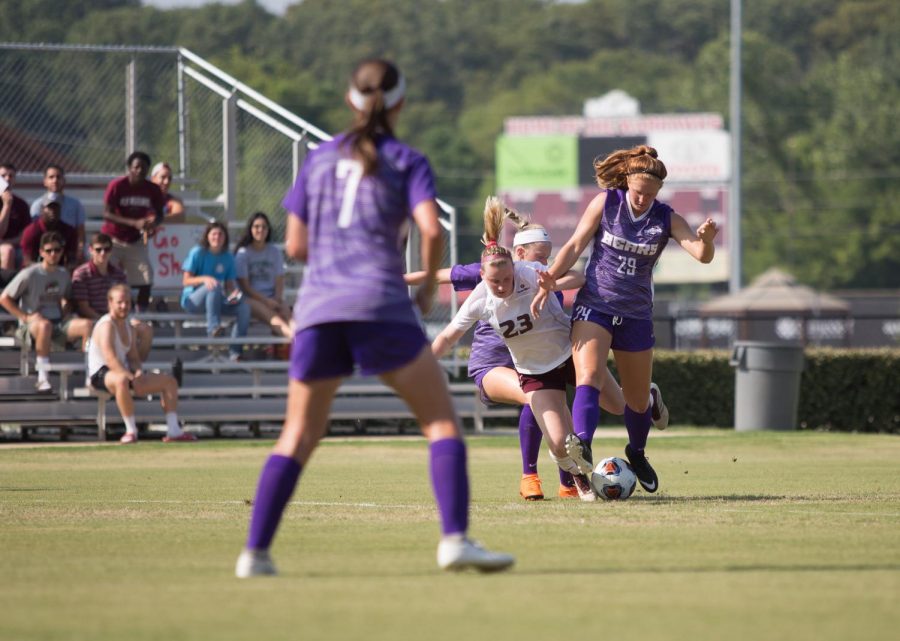 The Warhawk’s soccer team presented themselves to their faithful supporters for the first time this season as they faced off against Central Arkansas University. Through a valiant effort, the team fell 2-0.

“It’s always good to be back at home we train on this ground everyday; it’s good being back here,” Wheelock said.

A team full of fresh faces and hope started the game for the Warhawks. Four freshmen were featured among the initial eleven named for the Warhawks’ starting lineup. Among those mentioned was freshmen goalkeeper Bre Truscott, taking over the duties of senior goalkeeper Brooke-Lynn Scroggins.

“We’ve got a young team, a young staff we’re bringing back the blue collar work ethic to outwork teams. I think you are going to see a different style of soccer from us this season,” Wheelock said after the game.

“We have a great competition going on with our three keepers ,and that position is still up for grabs,” Wheelock added.

Other than the initial surprise of seeing Brooke-Lynn Scroggins on the bench, everything was as expected on the field. Sophomore forward Taylor Altieri continued to be an early source of action throughout the first half. Altieri received many balls in the midfield and continued making runs on the wing.

The last third of the pitch, as it’s usually been in the pas,t was the team’s weak point. A lack of clear connections between the midfielders and forwards only allowed for three shots on goal out of eight total attempted by the Warhawks.

“This year, I think we’re better at possession as a team. We can find each other; we just need to finish. We have all the leading up pieces,” Altieri said.

Freshman forward Mackenzie Bell had a good display against Central Arkansas registering two shots on goal out of two attempted.