Conference play kicks off with Pep Rally in quad 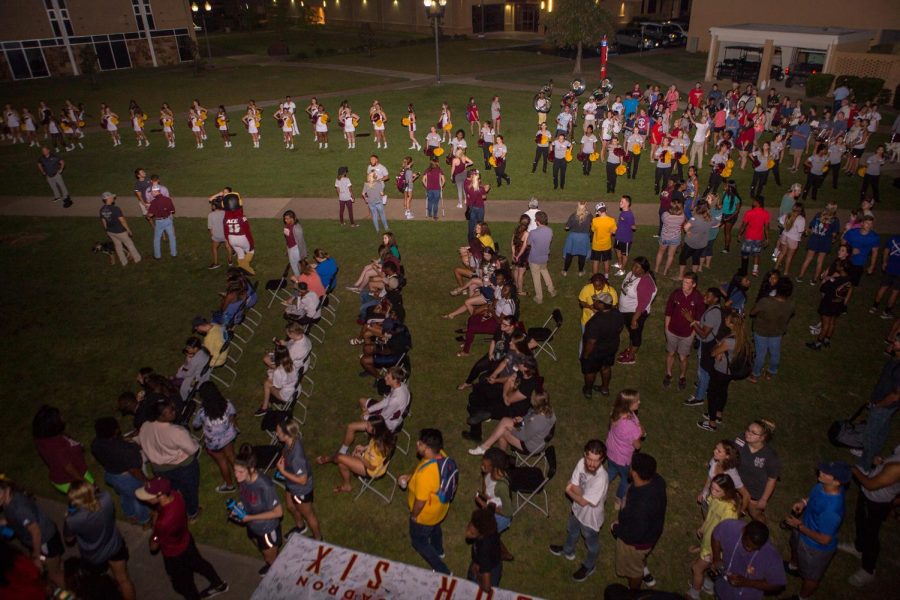 Free fun, free gear and free food seemed to be all that ULM Athletics needed to draw a big crowd for the introduction of conference play. With help from the Warhawk Women and the Campus Activity Board, ULM hosted the 2018 Conference Kickoff Pep Rally Thursday night in the quad. The pep rally featured players and coaches from three of ULM’s athletic teams, including football, volleyball and soccer, as they got fans excited about entering conference play during their next matchups.
Volleyball head coach Russ Friedland got things going with the introduction of the first of these conference matches. He announced that ULM Volleyball was geared to face off against Texas St. in Malone Stadium the following day, Friday, Sept. 21. When asked about what the pep rally means to the University and how it can get more students out to the games, Coach Russ had this to say.
“Yeah, this is great, anything we can do especially when we’re giving away and some free food and some free gear it’s an awesome opportunity for us coaches to get in front of the students and actually invite them to the games. You know, a lot of people may not actually know the games are free or when we play, they’re all focused on some other sports. But, we’re there and it’s a different fill in our gym. Our team is kind of re-energized this year and they are playing really well. We’ve got a 4 game win streak going right now into conference and now it’s time to see what we’re really made of.”
The familiar sounds of a Warhawk game day filled the air as ULM Cheer and the Hawkline performed alongside with The Sounds of Today Marching Band to excite students even more.
Joel Sinclair, the CAB Advisor, was out there to oversee the event and was excited to see pep rallies back on campus.
“I really couldn’t have thought of a better way to introduce conference play you know, it’s our first conference game in two weeks we’re pumped about it.” He continued. “It’s an exciting athletic season for all three teams especially and all of ULM athletics. The last time a pep rally has been on this campus was probably in 2012 when I was a freshman and with the turnout we had and the cooperation of student life, athletics, the coaches and especially the Warhawk women who came up with this great idea, this pep rally really put things forward in the right direction.”
As the night went along, students heard speeches from two other athletic organizations. Despite soccer being on the road to face off against Arkansas St. they were still recognized during the pep rally and given a supportive round of applause from the audience.
Football was represented by head coach Matt Viator, who hopped on the mic to announce the Warhawks home game against Troy. The game marks ULM’s second home game on the season as the Warhawks return to Malone Stadium after a tough loss to Texas A&M. After coach Viator was finished getting students ready for the game, students and fans alike were treated to a surprise speech from senior linebacker David Griffith. The speech was followed by a fantastic hype video to close out the event.
The pep rally carried into the night as good music and even better company kept students in the quad.