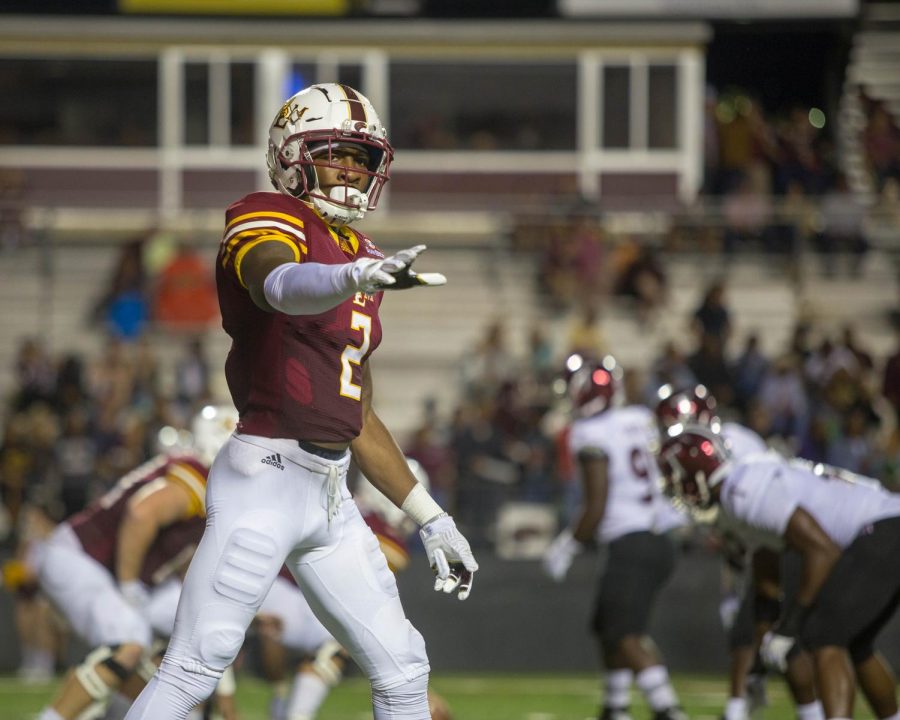 ULM’s defense showed up early on shutting down Troy’s opening drive of the game. After a big sack by sophomore linebacker Rashaad Harding on the first play of the game, Troy was forced to turn the ball over to the Warhawks for the first time.
The Warhawks wasted no time at all with their first possession however. A 13 play, 73-yard drive ended in a 1-yard rushing touchdown for senior running back Derrick Gore as ULM put their first points on the board to take the early lead.
It was a pretty good first quarter for the Warhawks as they managed to tack on seven points early on while holding the Trojans to a single touchdown of their own. Going into the second half of play the score was all tied up, 7-7.
Despite the strong start, the second quarter was a different story for the Warhawks. A drive that started late in the first quarter ended in a touchdown early in the second to give the Trojans their first lead of the game. The score seemed to open the flood gates for the Trojans.
After taking the 7-14 lead over the Warhawks, Troy was able to string together three more touchdown drives to completely run away with the lead going into the half, 7-35. The Warhawks defense looked like it had left the game in the first quarter as they couldn’t seem to shut down the Trojan’s passing game. They had 368 total yards in the first half with 272 of these yards coming in the air. The Warhawks were only able to put up 114 yards of their own with 74 of these of these yards being passing.
A fire must have been lit under ULM during halftime because they came out in the third quarter as a completely different team on both ends of the ball. Despite a promising first drive of the half ending in a turnover on downs for the Warhawks, it didn’t dim their comeback flame at all.
Their next possession, The Warhawks put together a 12 play 81-yard drive to give them their second touchdown of the game. They still had a long way to go if they were going to catch the Trojans, but the Warhawks looked determined to get back into the contest.
After the defense came up big for ULM they managed to find the end zone once again as Caleb Evans hit senior tight end Sloan Spiller on a 5-yard touchdown pass early in the final quarter of play to close the gap a little more, 21-35.
Things slowed down after the two big scoring drives from the Warhawks, but the game wasn’t over yet. The Warhawks managed to put another touchdown on the board about halfway through the fourth quarter to close the gap even more, 27-35.
With the game coming to a close and the Warhawks clawing their way back to within a single possession, things were getting interesting.
The defense did just as they had since the start of the second half and shut the Trojans down to give the Warhawks one final chance with under 2 minutes remaining in the game. A big drive from the Warhawks brought them all the way down into their own territory. Though a valiant effort right there in the end, The Warhawks drive ended in a heartbreaking interception that would ultimately end the game.
The Warhawks will look to bounce back as they hit the road for a three-game road stent. They will meet with Georgia St. in these first of these games. The game is scheduled to kick-off at 1 p.m. on Saturday, Sept. 29.