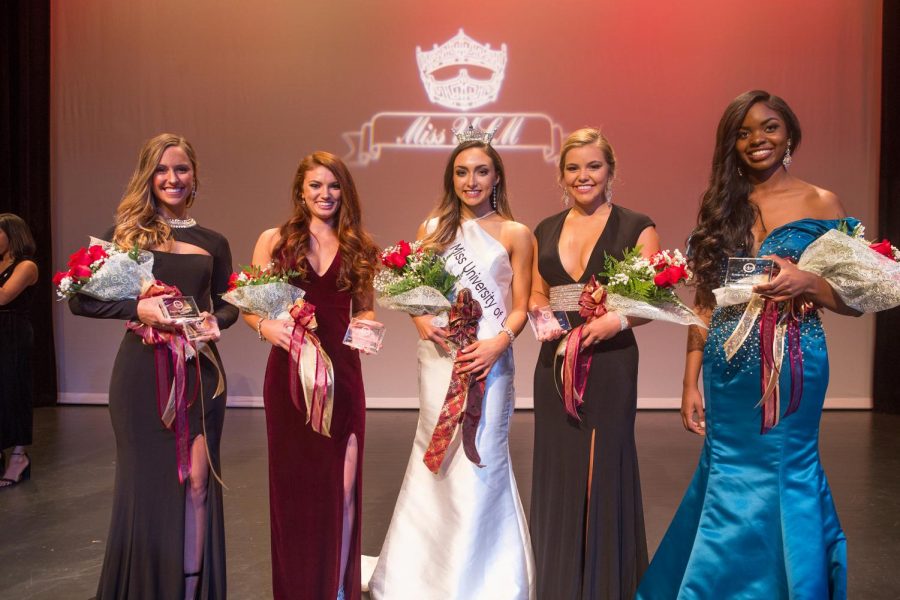 It’s the pageant that just keeps getting bigger. Friday night saw a new Miss ULM crowned in front of a packed Brown Auditorium.
Monica Whitman, a junior pre-pharmacy major from Tioga, Louisiana was crowned Miss ULM at the 66th Annual Miss ULM Pageant.
“I feel so awesome, I’m ready to kick this year off. I’m ready to start serving ULM and to get ready for Miss Louisiana in June,” Whitman said.
Whitman whose platform was making healthy a habit preformed a contemporary dance as her talent.
Whitman was one of 14 girls competing for the crown Friday evening. For those keeping count that is an additional five girls in this year’s pageant compared to last year’s.
The Miss ULM Pageant is associated with the Miss Louisiana Pageant hosted every year, that being said, there are certain requirements needed before any of the girls walk across the stage.
First of all, a participant in the pageant had to be a full-time student at ULM, enrolled in at least 12 credit hours. Second, they must have a minimum 2.5 GPA the semester previous to the pageant and a cumulative GPA of at least 2.5. For freshmen participants, their high school GPA was used.
Other than academic requirements ladies also needed to be a single female that has never been married or had children, between the ages of 18 and 25 years of age, be an American born citizen and a native Louisiana resident. Out of state students wanting to compete for the crown were required to have attended ULM for at least one semester.
Hagen Campbell, Miss ULM 2018, hosted the event alongside Miss Louisiana and second runner-up to Miss America, Holli Conway.
As per most pageants the categories and the percentage of the total score were as follows: the on-stage question category (20 percent), the lifestyle and fitness category or swimsuits (10 percent), the talent portion (30 percent) and the evening wear category (15 percent).
Before the winners were announced Campbell had her final time on the stage as Miss ULM, where she thanked all her supported for allowing her to be a representative of the school. She then returned to the stage in place of Nick Bruno, the university president, to crown her successor Monica Whitman.
“This year has been absolutely amazing, it is a once in a lifetime opportunity and I’m so glad that I was blessed enough to have this opportunity to pass the crown on to Monica, who is a dear friend. I know she’s going to represent the university well with poise and grace and honor. I’m just so proud of her,” Campbell said.
Campbell went on to joke that her time was up with the crown, which she is upset about but she knows Whitman will do a great job.
As the pageant ended friends and family were quick to storm the stage in hopes of being the first to congratulate Whitman and the rest of the participants.
“It was really great to work with her (Campbell) especially it being my first pageant and her first pageant. I think Monica really earned it this year and the judges did a great job,” said Derek Healy, 2018’s Mr. ULM.