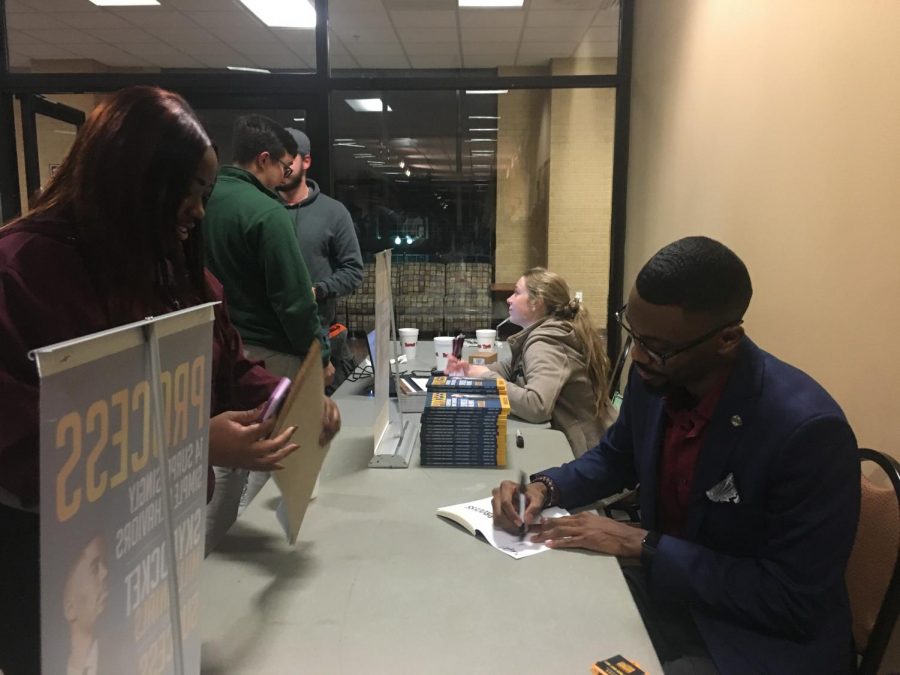 Jonathan Jones was working a retail job when his boss confronted him about his bad attitude. This encounter forced Jones to look inward and self-reflect.

“I was burned out,” Jones said. “From that point, I realized I needed to change something.”

He did not know it back then, but that moment led him down a different path.

Now, Jones is a best-selling author and motivational speaker who empowers youth with his story. He travels to colleges and other venues hoping to inspire young people to strive for a better tomorrow.

Tuesday, Jones spoke to ULM students about how to pursue their passions as part of the Leadership Workshop Series.

He used relatable anecdotes to teach the value of time, the importance of self-reflection and the need of a support system.

After telling a funny story about his own tardiness, Jones asked students to raise their hands if they struggled with time management. Hands quickly shot up across the SUB ballroom. He urged students to start practicing “time blocking.” Time blocking is a type of scheduling where a certain amount of time is assigned to each task. When compared to long to-do lists, it can be less overwhelming.

Jones wants students to self-reflect, just as he had to after the encounter with his boss. Students must first look inside themselves to find out what is holding them back. Then, they can adjust themselves to achieve their goals.

“After we self-reflect, then we can assess where we are,” Jones said. “Then, by seeing where we are, we see how far we need to go.”

Jones emphasized the need of a support system many times. He referred to it as a person’s “four corners.” A person’s four corners should consist of people who can be relied on in times of need. He reminded students to be careful of who they put in their four corners. Without a strong support system, it is hard to succeed.

Jones didn’t just speak to students. He spoke with them. At the end of the event, Jones gave away free copies of his Amazon best-selling book “Process” to the first 50 students who arrived at the Leadership Workshop. He talked to all 50 students about their goals, answered questions, gave advice and wrote personalized messages in the front cover of their books.

The Campus Activities Board is responsible for Jones’s appearance at ULM.

According to the Leadership Workshop committee head, Erick Burton, Jones reached out to ULM, asking to speak to the school’s students. After CAB watched Jones’s videos, they decided that he was “what our campus needed.”

“We felt like our students needed to be motivated,” Burton said.

Many students left the event inspired by what they had heard. Mikiyah Pratt, a junior toxicology major, was touched by Jones message about a person’s four corners. She agreed that it is important to have a strong support system.

“You need to surround yourself with good people, people who want you to do great things,” Pratt said.