Breaking News: ‘Vision 2031’ requested to be removed from OPPJ agenda

“Vision 2031,” a plan to grow ULM and Ouachita Parish through a property millage tax has been requested to be removed from tonight’s Ouachita Parish Police Jury’s (OPPJ) agenda, according to an email sent out by President Nick Bruno.

The email contained a letter written by George Schaeffer to the OPPJ which detailed the reasoning behind the request.

According to Scaheffer’s letter, “Vision 2031” has been turned into an “unfortunate and unprofessional” social media debate that is both “harmful and divisive.” The plan resulted in “misinformation being spread on social media” and also raised “legitimate concerns.”

OPPJ was to vote on a decision to add the tax to the fall ballot on their meeting today.

However, the plan hasn’t been completely abandoned. The group will review their timing and seek additional input before presenting the proposal at a later date, according to Schaeffer’s letter.

For more information, pick up next week’s edition of The Hawkeye. 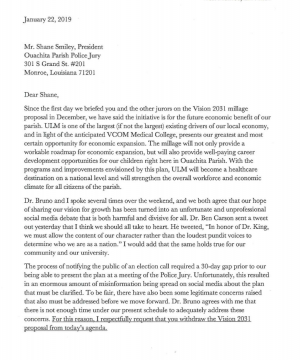 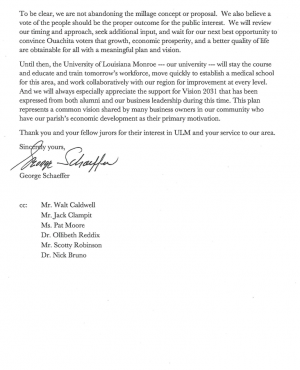