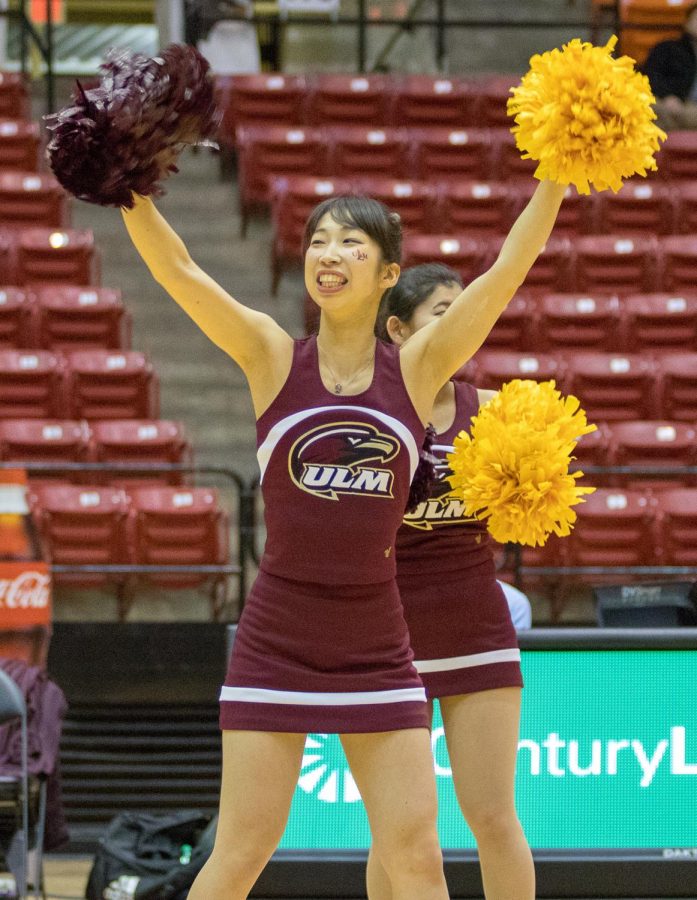 Entering a new country can be a scary thought, especially if you are performing a cheer routine, that you had learned a day before, in front of hundreds of strangers.

Nanami Kanosue, a Japanese student from Ehime University, was nervous to perform in front of the fans at Thursday’s women’s basketball against Texas State.

“We were a little nervous, but the ULM cheerleaders were so welcoming. We practiced a little bit, but they were very encouraging,” Kanosue said.

The experience was something Patience Talley, the assistant coordinator of Student Life and Spirit Groups, was happy to be a part of.

“This is the first time ULM Cheer has ever been part of an exchange program. It’s been absolutely amazing. When I heard about them coming, I was ecstatic,” Talley said.

From learning new baskets to eating crawfish for the first time, the exchange program students made sure to make the most of their three week trip to the U.S.

“In the U.S., there are nine mats used for cheer competitions. But in Japan we compete with seven mats. We do the same jump, toe touching, motions and tumbling,” Kanosue said.

Rio Mitsuhata, another Japanese student, was very impressed with the atmosphere at ULM’s basketball game.

“It was my first time watching a basketball game in the U.S. The atmosphere was very great. We don’t have a live band in Japan. It’s just the crowd cheering. I enjoyed listening to the band,” Mitsuhata said.

Morgan DeRosia, a second-year cheerleader, was impressed by the exchange students’ skills.

DeRosia was up til 2 a.m. the night before the performance, going over cheer moves with the exchange students. She also picked up a few Japanese sentences while acting as their unofficial guide at ULM.

“I didn’t get to learn any Japanese cheer moves. But they caught on easily whenever I was teaching. They learned ‘Hey Baby’ two minutes before we went on the floor,” DeRosia said.

The exchange program, though very short, inspired Talley and the cheerleading team to reignite their flame for cheer.

Talley said that the entire ULM cheerleading team, who are in off season, were smiling from ear to ear when the four students showed up at practice.

“They brought a different energy and taught us a few hand signals from Japan. They may think that they’ve taken a lot from us, but we’ve taken so much more from them just being with us,” Talley said.

Talley is looking forward to an exchange program where ULM cheerleaders will travel to Ehime University and learn cheers in Japan.

Nanami and the other cheerleaders from Ehime will remember this experience and ULM , especially with the ULM merchandise they bought.