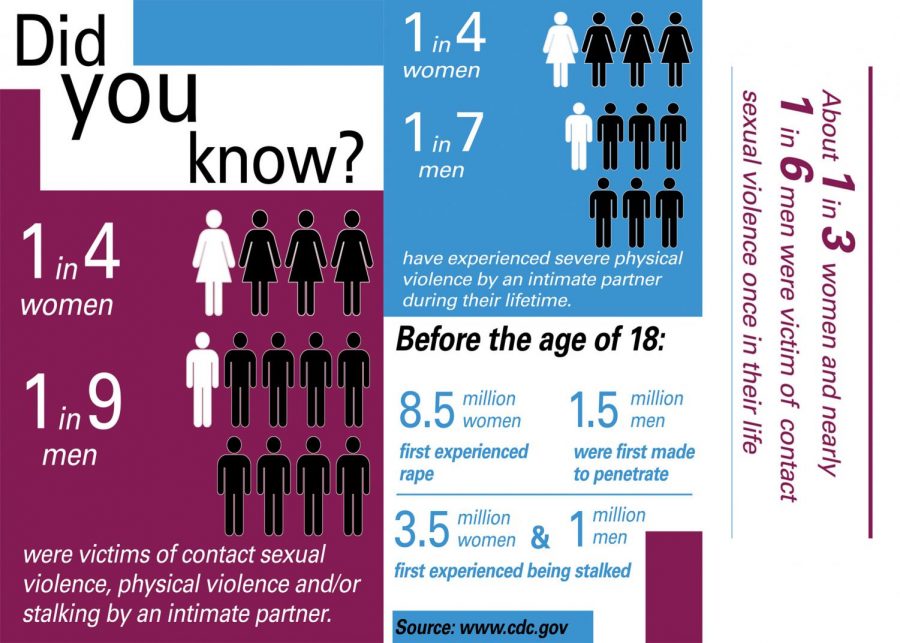 In the span of a month, two ULM football players were arrested in separate domestic violence disputes. Neither disputes occurred on campus, but domestic violence on college campuses is more likely than one might think.
According to the Bureau of Justice Statistics, about six in every 1,000 college students will be sexually assaulted on a college campus. Of those students, 80 percent will never officially report the assault to the police. As domestic violence prevails on campuses across the country, college administrations are attempting to provide prevention aids and resources for their students. Our university is just one of many in Louisiana working to prevent domestic violence on and off college campuses.
According to Treina Kimble, ULM’s Title IX coordinator, all colleges in the University of Louisiana System are encouraging their students to participate in a campus climate survey developed by the Louisiana Board of Regents this spring.
“The more students who participate, the more we will learn which can help us take on the issue of domestic violence in a meaningful way,” Kimble said. “Your response will make a difference.”
The survey is completely confidential and opened on March 11 of this year when Kimble sent out an email to every ULM student. The email explained the survey in detail and included the link of where to answer it. Students have until April 22 to participate.
“Prevention is important to me, but we also have resources readily available for when a domestic violence case does happen,” Kimble said.
When a student comes to Kimble with a domestic violence case, she puts a list of resources in their hands. She said she believes that victims often need time to think before acting.
On the list of resources, Kimble gave students contact information to local counseling centers, hospitals and hotlines that aid domestic violence victims in taking care of themselves after an incident.
A resource recommended by Kimble was ULM’s Counseling Center. It is a great resource for students to utilize in situations that can be difficult to talk about.
“Our counselors help connect students to community resources to ensure they receive the very valuable services they need,” said Karen Foster, the Counseling Center director.
One community resource is the Wellspring which offers programs for victims of domestic violence and sexual assault. Their domestic violence program is free, confidential and available to people of all ages. The Wellspring has shelters for domestic violence victims in a 12-parish region. April is domestic violence awareness month, and the Wellspring is collaborating with the Femhawks to host “Walk a Mile in Her Shoes” for the fourth year in a row. This event on April 4 is an effort to show support to survivors of sexual assault.
Another way ULM has attempted to prevent domestic violence from happening on campus is by implementing the Violence Against Women Act.
During the Clinton administration, the VAWA was passed to support the prosecution of domestic violence offenders. In 2013, President Obama revamped the act to include that colleges must educate their students about how to prevent domestic violence against women.
Robert Hanser, the director of VAWA, said that as of last month, funding for the act expired. ULM will continue to prevent domestic violence with or without the law in place.
“This is a sad outcome, and hopefully, it will get remedied in the future,” Hanser said.