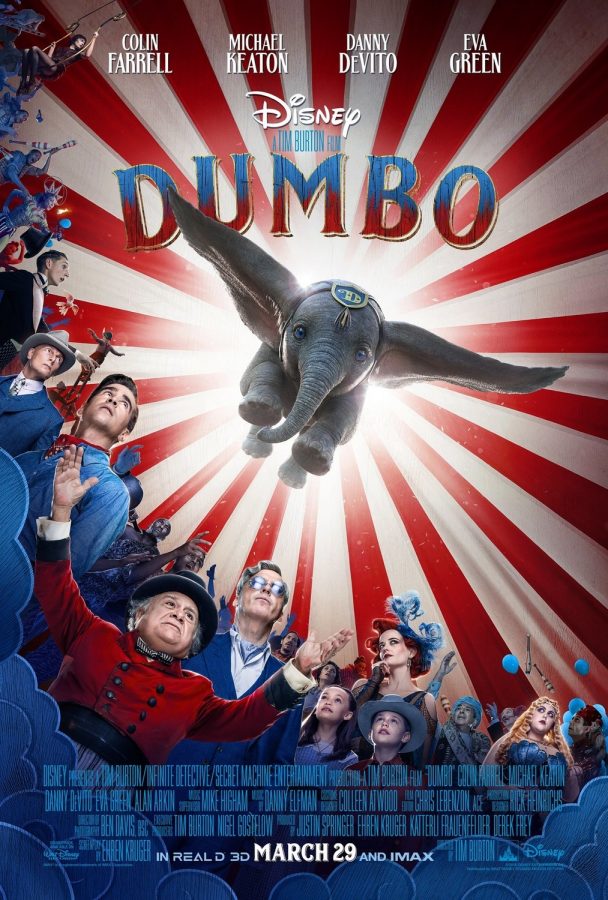 Although Dumbo can soar above crowds with his oversized ears, Tim Burton’s retelling of this Disney classic felt more like a crash landing.
Despite having a cast filled with critically acclaimed actors like Michael Keaton and Danny DeVito, “Dumbo” lacked the emotion needed to be a successful movie.
In fact, the CGI elephants often gave a better performance than any actor or actress. This wouldn’t be such a bad thing if Burton had not veered from the original plot of “Dumbo” and added characters with an entirely new plot of their own.
Burton’s remake held little resemblance to the original movie loved by many Disney fans after his addition of characters.
One of the new characters is Max Medici, who is played by DeVito. Medici is the owner of Medici Brothers’ Circus where Burton’s new characters live and work. Another new character is Holt Farrier, played by Colin Farrell, who returns to his family at the circus after World War I. While he was gone, the circus suffered financially.
The new plot focused more on Farrier’s family, the other circus performers and attempting to bring the Medici Brothers’ Circus back to its prime. The original film revolved around Dumbo yearning for his mother who was taken away.
Dumbo’s dilemma was still part of the movie but often fell to the back burner for Burton’s new plot to shine. It wasn’t until the last 45 minutes of the movie that Dumbo and his mother really seemed to play an important role in the plot. Coincidentally, this was the best section of “Dumbo.”
The terrible acting made Burton’s unique take on “Dumbo” hard to enjoy. Scenes that were supposed to bring the audience to tears fell flat. This was not only a product of stale acting but also underdeveloped characters on Burton’s part.
Each character’s personality was a cliché that never changed. Their relationships with each other and Dumbo came off as forced. It was hard to feel sorry for them or root for them.
In the end, Burton’s attempt to revamp a Disney classic flopped. “Dumbo” may do well in the box-office but that is only because of the world domination the company has worked hard to earn. For the future, Disney should focus on creating original movies instead of profiting off our nostalgia and blowing millions of dollars on subpar remakes.