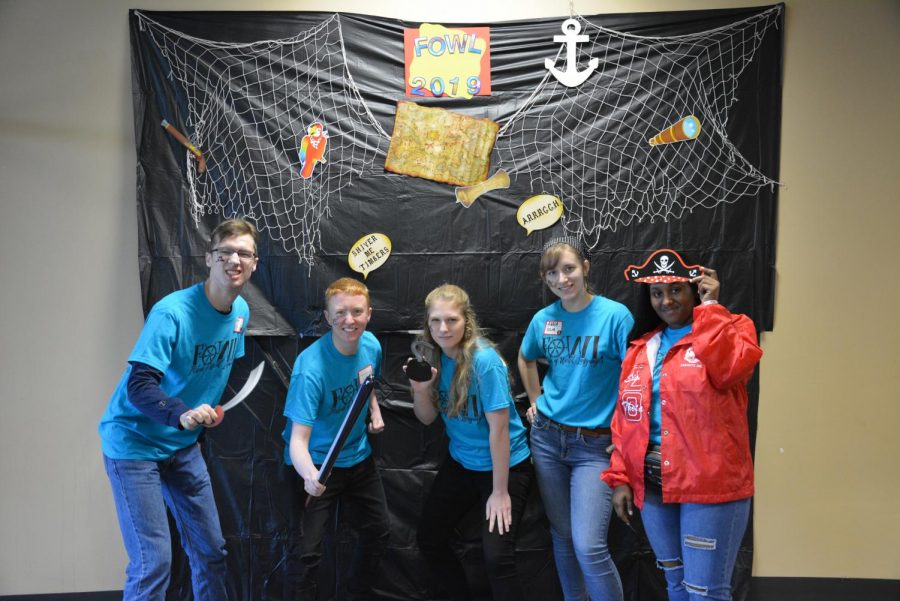 The stairs leading to the Hangar were decorated by pennant banners with pirates printed on them followed by a sea of ULM students and high schoolers wearing bright blue shirts. The scene was fitting for this year’s Festival of World Languages theme, “Learn a language. Find a treasure.”
ULM hosted its 10th annual Festival of World Languages on Saturday thanks to professors Mary Blanche Wortham and Ruth Smith who co-directed the event.
High schools from across Ouachita Parish were invited to participate. Students from these schools were given the chance to learn about different cultures and their languages in an interesting way.
Junior elementary education major Bonnie Hemphill believes that the Festival of World Languages is a useful event for high school students to attend. It provides them with information on furthering their language studies after leaving high school and promotes the idea that it’s important to do so.
“Studying another language connects you to all these other people and allows you to travel and be able to speak with people you never would have been able to before,” Hemphill said.
Professors from ULM’s language and English departments gave presentations on unconventional cultural topics. To follow this year’s theme, professor Fredrick Adams gave a presentation on Jean Lafitte, the famous French pirate.
At the end of the event, students participated in a survival trivia game created by high school Spanish teacher Laura McLeland to see which school learned the most during the presentations.
High school students lined up wearing eyepatches, mustaches and fake hoop earrings while answering questions. ULM students with a passion for different foreign languages brandished foam swords and helped the losers “walk the plank” back to their seats.
Students paid $10 to attend the Festival of World Languages and received a t-shirt, pizza and a little education.