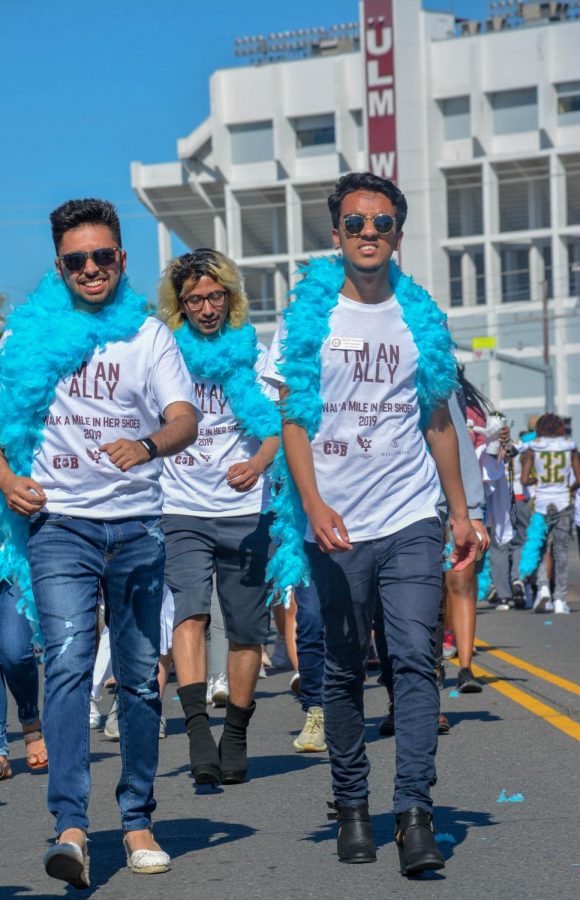 In international student Sonya Maksimenkova’s home country, Ukraine, women rarely speak out against sexual violence.
During her first year in the U.S. and at ULM, Maksimenkova joined Femhawks and learned about women’s ability to fight against issues like sexual assault. Now, she hopes to take her new-found idea of women’s rights to Ukraine with her.
“I will try my best to spread the knowledge and information about how sexual assaults are prevented in the U.S. when I get home,” said Maksimenkova, a freshman computer science major.
Maksimenkova was given the chance to stand up for women everywhere last Wednesday thanks to Femhawks.
For the past four years, Femhawks has partnered with the Wellspring to host Walk a Mile in Her Shoes, a march practiced across the globe.
The walk was designed to bring men and women together to advocate against sexual violence.
Participants, both male and female, put on a pair of heels and wrapped teal boas around their necks before strutting down the bayou bridge and back to Bayou Park in honor of sexual violence victims.
Although heels weren’t required, they were preferred.
Femhawks secretary, Jessica Hawkins, said Walk a Mile in Her Shoes is her favorite event hosted by the organization.
“It’s my favorite because it brings attention to such crucial women’s issues,” said Hawkins, a senior psychology major.
Melanie Clark loves connecting at this event.
“I love getting to work with old friends and meet new ones each year,” said Clark, the Wellspring’s sexual assault program coordinator and therapist.
Junior psychology major Whitney Kwentoh said although Walk a Mile in Her Shoes is an important event, students shouldn’t stop their activism there. Kwentoh believes there is still work to do when it comes to sexual violence.
“Remember that the fight against sexual assault and the systems in place that create and protect assaulters and abusers is ongoing, and we shouldn’t stop until the safety of marginalized people is ensured,” Kwentoh said.
After walking back to Bayou Park, there was a candlelight vigil for victims. During the vigil, sex-ual assault survivors and supporters of sexual assault victims shared testimonies. Live music was also provided by Maksimenkova and Adam Blackburn.
After performing “Never Give Up” by Sia, Maksimenkova felt that she was doing “the right thing.”
“I was really nervous, but I haven’t felt this good in a long time,” Maksimenkova said.