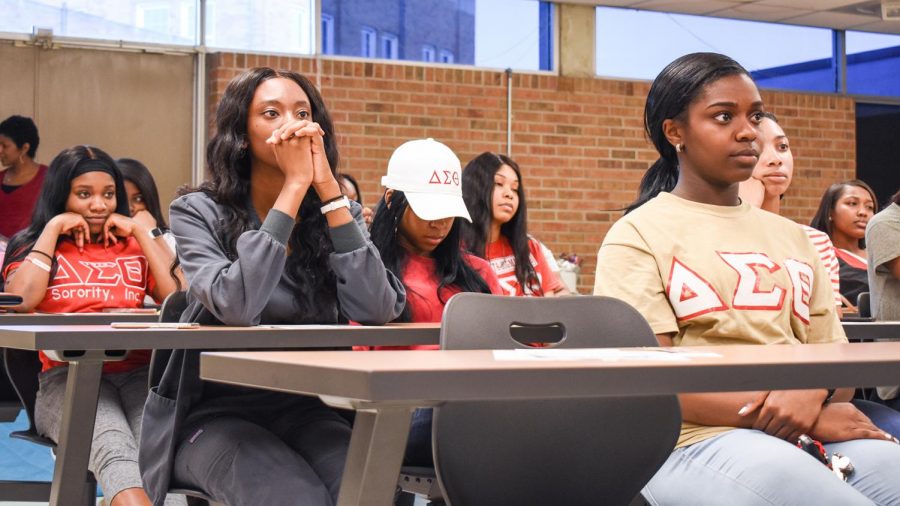 Every nine seconds someone becomes a victim of domestic violence. For Jeslyn Lewis, this experience is something immeasurable, especially if those who are victimizing you are your family.

For years, Lewis let her husband physically and emotionally abuse her.

“Any abuse is too much,” said Lewis, a Wellspring outreach coordinator. Lewis was one of the speaker’s at Delta Sigma Theta Sorority Inc.’s  “Love Doesn’t Hurt” informational.

April is the month devoted to sexual assault awareness, so now is as good of a time as any to inform the community on what the difference is between true and tainted love.

Scott herself may not have been a victim of domestic violence, but she has been a bystander to those who have. Scott said that recognizing what love truly is puts oneself in control of how they are treated.

“There is not a preparatory class to protect against domestic violence, however, when it strikes; we love,” said captain Sylvester Taylor, a returning speaker.

During last year’s event, Taylor shared his story of how his brother murdered his father and mother.

This year, his wife, Carlie Taylor, shared her side of the story as a witness away from the scene. Carlie received a call one night on a trip in Michigan; the call had left her shaken and confused. Never would she have expected that her brother-in-law would’ve done such a thing.

“He was one of the sweetest people I knew,” Carlie said.

However, the pain from that one night still haunts her and her family.

“It’s been five years since the incident. The pain never goes away,” Carlie said.

Lewis also recalls specific moments in her life where she felt the weight of domestic violence.

One incident was  when she was having a normal conversation with her friend about how her friend’s husband was being insistent on not matching outfits with her. All Lewis was able to focus on during that time was how the pain of her toxic marriage was weighing her down.

“If color coordinating were our only problem, then I’d be so happy,” Lewis said.

Being that domestic violence is the number one cause of injury to women and children, “Lambda Rho wants to be able to give as much back to the mind, body and spirit as we can,” Scott said.

Those who worked the event made it their duty to stay behind to make sure that anyone who needed helped received the appropriate contacts to ensure their safety.

Monroe Police Department detective Lisa Quillar, Lewis of the Wellspring, Gwendolyn Guidry of GOCARE and Curtis Sanders, a Bastrop-based obstetrician and gynecologist, attended the event to provide students with the information that could one day save their lives.