Journalists no longer use objectivity in writing 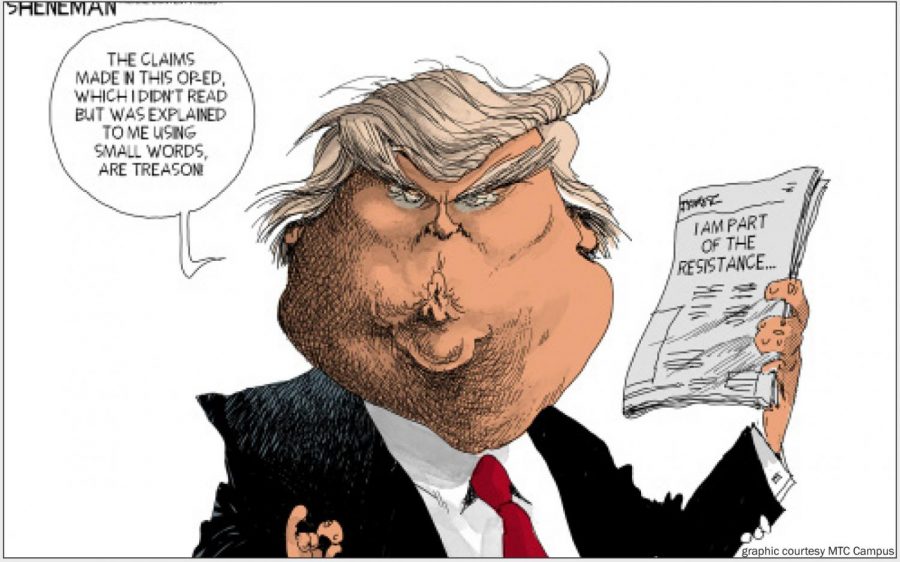 Ever since President Trump was elected, there have been rallying cries of “fake news” pointed toward all media outlets.

According to the John S. and James L. Knight Foundation’s Trust, Media and Democracy initiative, most adults in the U.S. have lost trust in the news in the past two years.
During their research, the Knight Foundation discovered that the reason most adults don’t trust news outlets anymore is because they are worried about biased news.

But in 2019, it is hard to find a news source that is completely impartial. In fact, I don’t believe there is one.
Fox News and CNN are two of the most prominent news outlets in the U.S. and both lean toward one of the U.S.’s major political parties.

So, what outlet is directly in the middle?
The answer is that there isn’t one.
Some sources get close to being impartial like the Wall Street Journal, but none can ever be 100 percent unbiased.
Every journalist will approach their articles with an arsenal of experiences that will influence their work and whether it is intentional or not does not matter.
Some part of the journalist writing will make it into their work.

There is nothing that any reader can do about that.
The Knight Foundation also discovered that twice as many young adults aged 18 to 34 mentioned political bias as a major factor in their mistrust of the news.
Sixty-nine percent of the people surveyed believe they can regain their trust in the news.
But if bias is their problem then I doubt they will ever begin to trust the media again. Bias will always be there.
It is not something that will go away in the upcoming years.
When the concept of objectivity was first introduced to journalists, it did not even mean what it does now.
In fact, according to the American Press Institute, it began as the idea that journalists should learn to develop a “transparent approach to evidence.”

Journalists are often not the only ones being biased.
Readers will gravitate toward news sources that blatantly lean to the left or the right depending on what their political party is.
Then, they will call out other news sources as being biased or fake news.
A lot of people’s mistrust of the news comes from their own inability to read something that doesn’t play into their own personal biases.
It doesn’t help whenever the U.S. president takes jabs at the media and pushes people to mistrust it even more.
On multiple occasions, he has referred to news outlets as “the lying media” and even more harshly, “the enemy of the people.”
Understand that journalism isn’t perfect and won’t always be objective.
The only solution to biased news is for the reader to make sure they are looking at multiple sources with different perspectives.
If each news outlet is going to be biased in some way, the reader must do their part to balance what ideologies they are reading.
If you aren’t doing your part, you can’t complain.
If there is a political or world event happening, the chances are that multiple types of news sources have covered the story.
Read about the issue from news sources with different biases.
This will allow you to form your own opinion after learning about the event from every side.