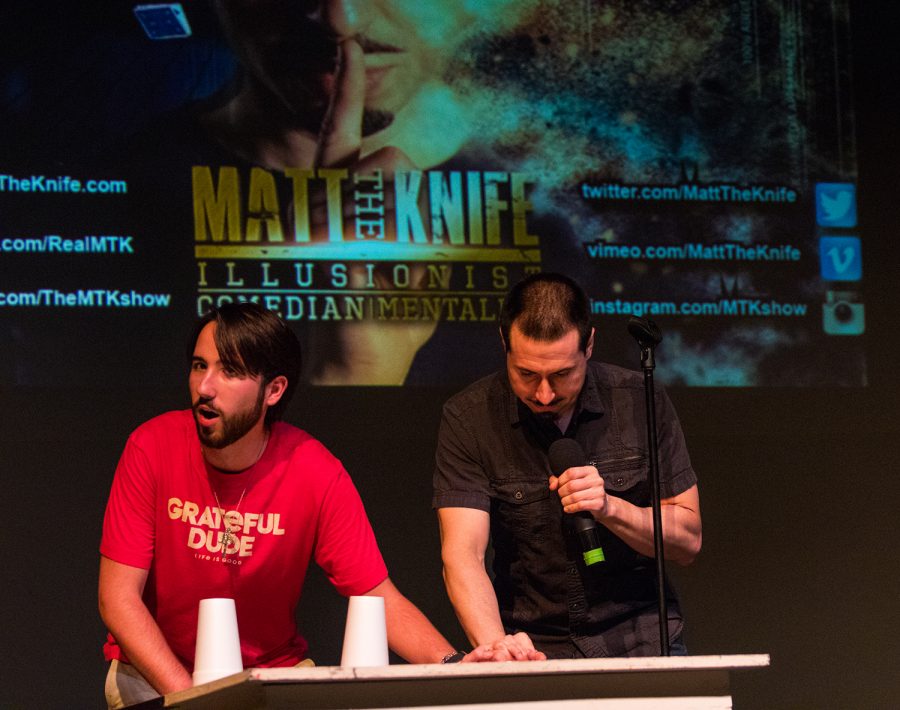 Thursday night students stood outside the door of Brown Auditorium awaiting to see the amazing “Matt the Knife.” Although the show started about 20 minutes later than planned, it was well worth it.
Matt the Knife started off his show with a slight comic show and then dove into his “sword swallowing act.” Instead of using a sword, however, he chose to use a wire hanger.

The illusionist even pulled several students from the audience to assist him in the show. He chose one particular student to pull the hanger from his throat leaving many students in awe.
Although many were impressed with the beginning of the show, audience members were still not in full belief of the illusions.

Matt the Knife then performed one of his mentalist acts. He asked for an audience member that was willing to share their story about a friend or family member that recently passed away.
Sophomore psychology major, Ashley Holaway, volunteered to share her story but did not say it aloud. Matt then began to feel the pain in his chest as Ashley’s friend felt when she passed and audience members jaws dropped.
Matt was able to ask things about her friend only she would know. He was able to write the friend’s name on a poster leaving Ashley amazed and in tears. “I was completely awestruck at his ability to sense and read my thoughts about her down to the point that he knew I was thinking about her passing away instead of a good memory I had with her.” Holaway said.

Ashley was even able to meet with Matt the Knife after the show and he thanked her for sharing her story. He gave her the poster he wrote her friend’s name on with his autograph at the bottom.
Matt the Knife did an amazing job and his show kept the audience with smiles making this a great way to conclude Week of Welcome events sponsored by CAB.
The mentalist and illusionist said in an interview that CAB “worked really hard” to get him to perform on campus and he exclaimed our CAB board “is an absolute delight…they are fantastic and they work really hard. They really appreciate my work and what we do. “