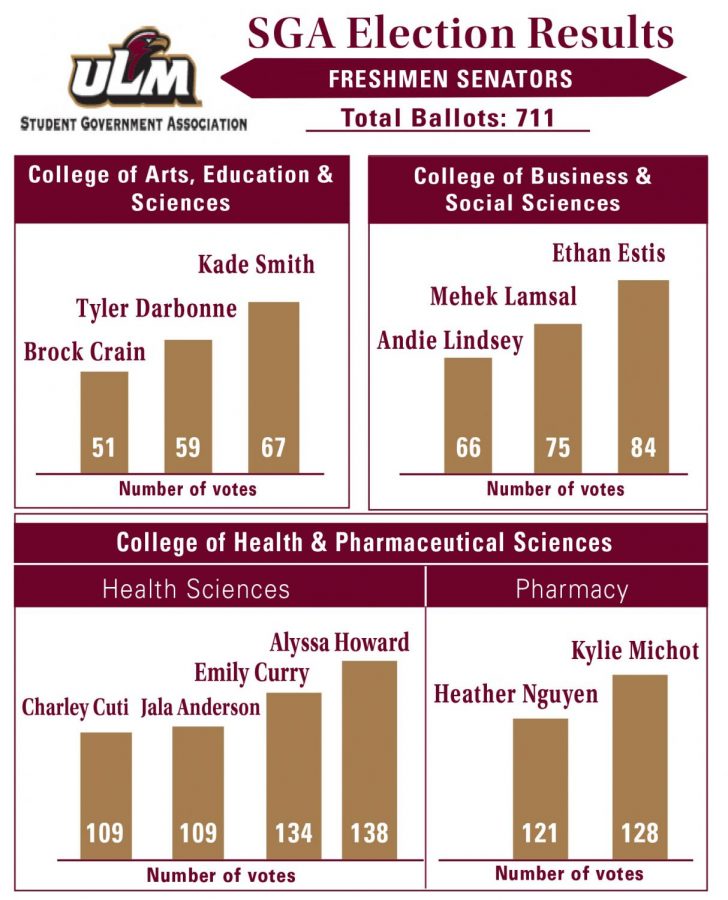 The Student Government Association is a service organization and the freshmen who would take up the mantle as the new blood of the organization have a lot on their plates.

Before running themselves ragged trying to serve the student body, they must first win. So, who are our winners of the freshmen SGA elections?

For the College of Health Sciences, your freshman senators are Emily Curry and Alyssa Howard.

All total, these young ladies earned 371 votes. That means over half the people who voted in the election, with a total of 711 ballots submitted, voted for one of these candidates.

The College of Business and Social Sciences elected Ethan Estis, Mehek Lamsal and Andie Lindsey. It was a close race in this college, with some candidates coming in with tie votes.

A few more ballots could’ve changed the entire result. But that’s not to say that these freshmen haven’t earned their positions.

The College of Pharmacy, known for being ULM’s smallest college, elected Kylie Michot and Heather Nguyen.

The college united behind these candidates, with the next highest polling freshman coming in with 40 less votes cast for them than the others. It’s no surpise Michot was elected as many know his campaign slogan, “Vote for Kylie, make me smilie!”

The College of Arts, Education and Sciences elected Kade Smith, Tyler Darbonne and Brock Crain. These young men have been spreading the word on their desire to be in SGA across campus.

“I am thankful for my Kappa Sigma brothers for the support through my election and helping out every chance they could,” Crain said.

SGA is always looking for young men and women to serve the common good. If you or the candidate you were rooting for did not get a spot this election, try again next time.