Overdose by 80s: Autopsy on our film World 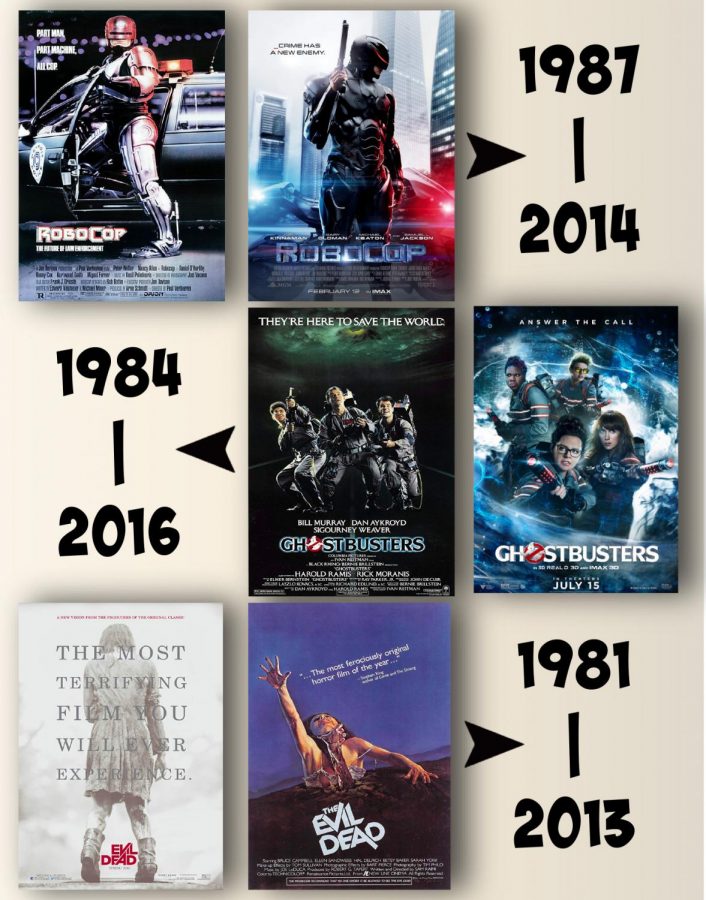 “Back to the Future.” “Ghostbusters.” “Robocop.” “Aliens.” “The Terminator.” These iconic films and countless others helped create the “Count Chocula”-flavored 1980s, a decade the film world almost worships. Their legacy remains in the entertainment industry today as future generations bond over these radical movies. However, has Lady Hollywood injected more “Hi-C Ecto Cooler” than she can tolerate?
Let’s begin our autopsy with remakes. Lady Hollywood continues to remake many 80s films like “Friday the 13th (1980),” “The Evil Dead (1981),” “A Nightmare on Elm Street (1984)” and “Robocop (1987).” Remakes are quite polarizing.
Michael Rechtschaffen of The Hollywood Reporter gave 2010’s “A Nightmare on Elm Street” remake a harsh 30 out of 100 and said, “The back-to-the-beginning approach unimaginatively goes through the motions, offering scant justification for its boring existence…”
However, Williams Goss of Film.com gave 2013’s “The Evil Dead” remake a positive 7.5 out of 10 and said, “The downright gnarliest mainstream horror release in recent memory…”
Remakes are generally seen as unnecessary bogus.
Next in our autopsy are 80s influenced films. These modern movies take place or borrow elements from the 80s era. Such films like “Atomic Blonde (2017),” “Thor: Ragnarok (2017),” “Bumblebee (2018),” “Bohemian Rhapsody (2018),” “Rocketman (2019)” and “Joker (2019)” take place or wear an 80s aesthetic: glossy and neon-pumped or gritty and dirty. Notice the frequency in releases? That’s a big bowl of “Smurf Berry Crunch!”
We need insight for our final procedure. No better to ask than someone who lived in this tubular time like history professor Christopher Blackburn. Blackburn said generation gaps are one cause to the remaking of 80s films.
“I think it’s mostly the demographic in the country. People from the 80s are in their 30s, 40s now. They’re gonna watch these movies and pass it on to their kids. It’s nostalgia,” Blackburn said.
Blackburn also said it could be because of corporate companies.
“It’s a business at the end of the day,” Blackburn said. “They know people will spend money on this stuff. They will make movies that make money.”
Blackburn even said there’s a possibility for a 90s era in the future.
“Give it 10 years and everything will be 90s,” Blackburn said.
We’ll never know exactly if Lady Hollywood overdosed on “Ecto Cooler,” or maybe “New Coke.” Regardless, we’ll keep loving the 80s and munch on “Mr. T cereal” and “chill pills!”