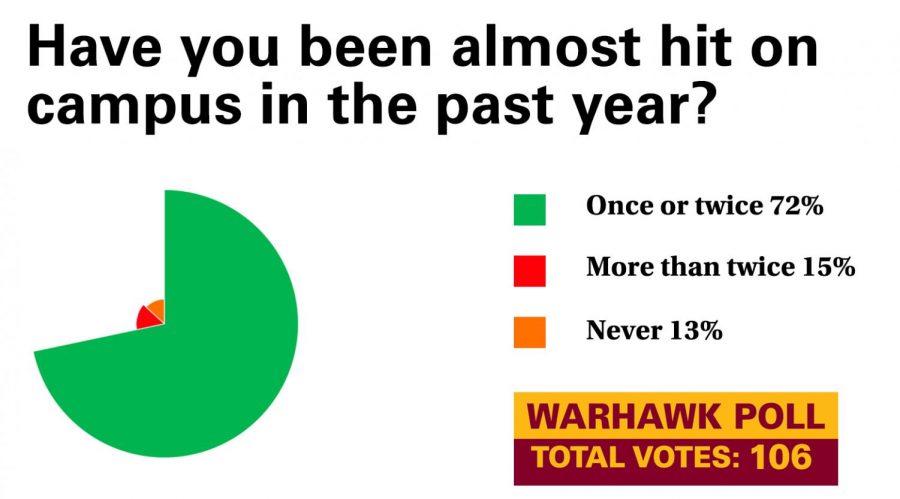 Madison Frost, along with her friend, were crossing the road between Schulze and the Coliseum when a speeding car made them sprint toward the sidewalk. Frost said that “the car was speeding very bad.”
“The people driving were at fault. I was not texting but in three out of four (incidents) people were texting when it happened,” said Frost, a junior modern languages major.
As the University Police Department “had been receiving similar concerns from students via social media and emails voicing their concerns,” the department has decided to strictly enforce traffic rules all over campus.
In a poll conducted by the Hawkeye with 106 students on Student to Student at ULM, around 72 percent claimed to have experienced almost being hit by a vehicle at least once just in the past year and 15 percent claimed to have been almost hit more than twice in a year time frame.
As per the campus-wide email issued by the police chief Tom Torregrossa, UPD will be “concentrating on speeders, violations for texting while driving and disregard of traffic controls.”
The rules are being enforced by active officers on all the streets with crosswalks on campus. This includes Northeast Drive, University Avenue, Bon Aire Drive and Warhawk Way.
Christian Johnston, a graduate student, thinks UPD enforcing traffic rules will benefit ULM.
“It’s great that UPD has made a change to help with the number of pedestrian students nearly being hit,” Johnston said.
However, she is not certain that speeders are the main issue. Her major concern is people texting while driving and walking.
The marriage and family therapy student believes “both drivers and pedestrians simply need to pay more attention.”
Further, as per this enforcement, both students and non-students will face a penalty for traffic violations.
“Tickets are being issued on traffic stops to the violators,” Torregrossa said. “Some of the violators are students and some are non-students.”
Torregrossa said he hopes the student body will be supportive of this change as they have been of similar situations in the past.
“I have applauded our students in the past for stepping up and assisting UPD. Our ‘See Something/Say Something’ initiative has allowed for a great relationship,” Torregrossa said. “I have read the social media posts, and also responded to emails where students are in favor of traffic enforcement.”
These types of initiatives from UPD have made students feel safer walking on campus.
“I love the new rules the UPD has started. We should be more strict about traffic rules. Having more strict rules definitely makes me feel safer,” Frost said.