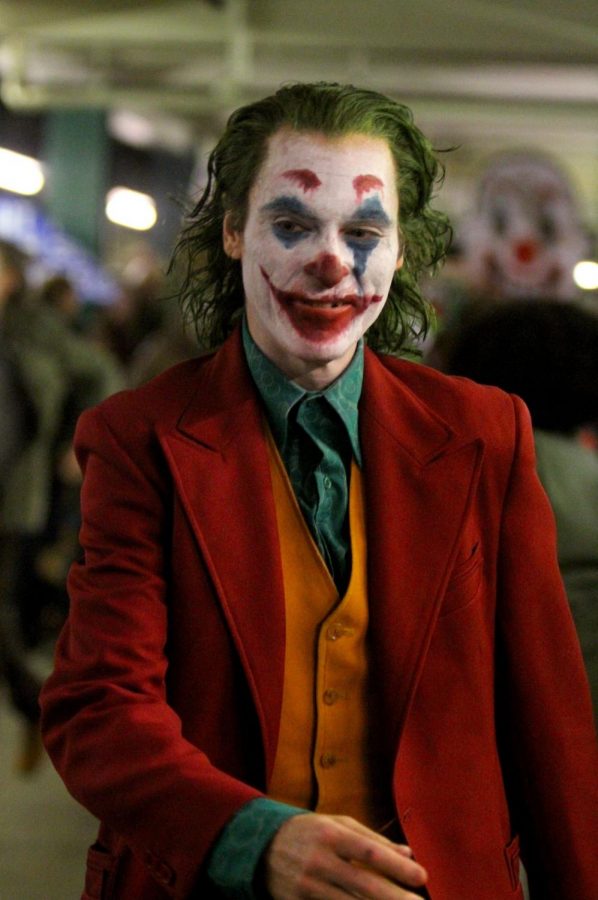 October is finally here and so is “Joker,” a grounded and twistedly beautiful tale about an unstable man tortured by Gotham City society, and how he becomes the “Clown Prince.” There are no big spectacles and superheroes here.
This is an intimate study of an unfortunate man. “Joker” takes you on an emotional rollercoaster through sadness, loneliness, hopelessness, pain, anger and vengeance.
It also locks you in a Hollywood Tower of Terror ride. You start at the top looking into main character Arthur Fleck’s life, then fall to your doom as Fleck slides into madness.
Joaquin Phoenix flawlessly plays Fleck, who succeeds in making you feel sympathetic, uncomfortable, nervous and eventually you dread him.
Just wait until you hear his laugh as it is guaranteed to send chills under your skin.
When Phoenix switches to The Joker, he is a dancing purple-clad force. Phoenix loves immersing himself in his characters.
He lost 52 pounds, isolated himself and stormed off mid-scene if unhappy with his performance.
When actors put in as much dedication as Phoenix, the result is much more incredible and memorable.
Director Todd Phillips wraps “Joker” in a retro 1980s veil from the dirty Gotham streets to a vintage Warner Bros. logo.
The film is not comic book-based with no connection to the DC film universe.
Instead, the movie mainly takes influence from filmmaker Martin Scorsese’s “Taxi Driver (1976),” which is about a delusional veteran as a taxi driver and “The King of Comedy (1982),” which is about a failed comedian whose fantasies of fame merge with reality.
“Joker” brings some themes and ideas to think about relevant to our world.
These themes range from rich vs. poor, proper health care for mental illnesses, society’s lust for anger and the subjectivity of comedy.
Hildur Gudnadottir’s score and songs are feasts for the ears. Gudnadottir composes a somber score with melancholic, almost grieving strings.
It can be Fleck’s life in music form. Songs like “Send in the Clowns” by Frank Sinatra and “Smile” by Jimmy Durante add to the vintage style and emphasis on scenes.
Todd Phillips’ “Joker” studies and tells a stylish cautionary tale about how a broken man can evolve to a strong threat.
It is uncomfortable and intense, yet strangely delightful. This gem warrants several viewings especially for debates about the ending.