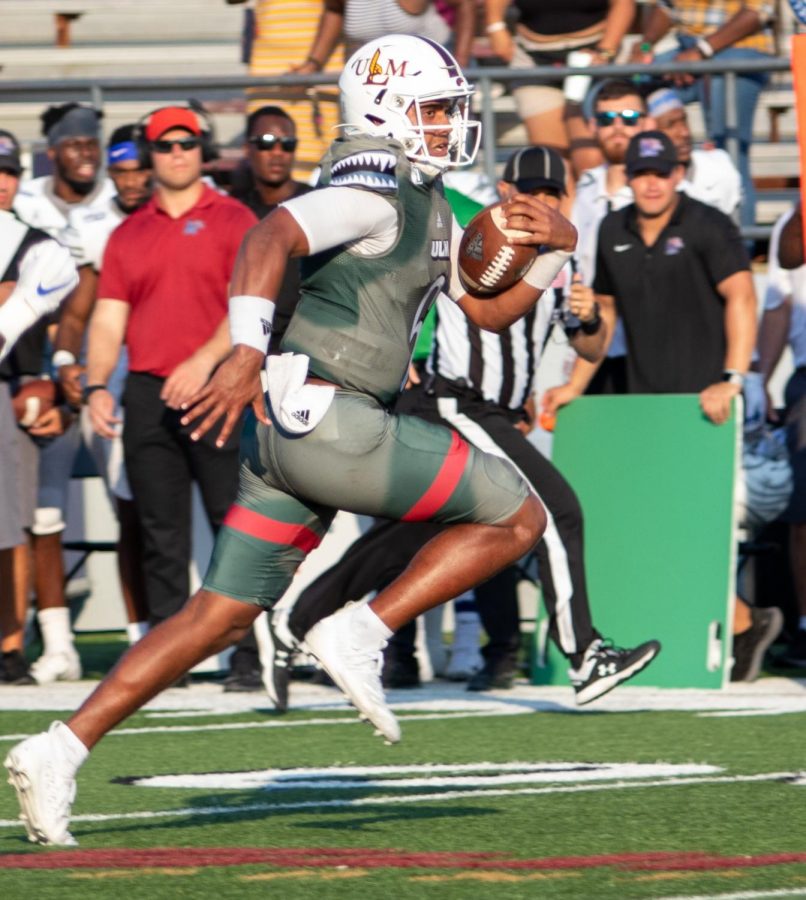 A ranked team at Malone Stadium and a “third time’s the charm” attitude against a big team ended in another Warhawk heartbreaking loss. Memphis beat the Warhawks 52-33 after a close game that ended in a fourth quarter let down for ULM fans.
The Warhawks went into the game already at a disadvantage. Junior offensive guard T.J. Fiailoa was ruled out because of an injury he sustained during the South Alabama game. His friend and teammate fifth-year senior Bobby Reynolds wore Fiailoa’s number 68 for the game. Another starter for the defense, Chase Day, a fifth-year senior linebacker, was also out due to injury.
“When he [Fiailoa] went down that really hurt me personally so I kind of wanted to give him a tribute because he means not just a lot to me but the whole offensive line and I think our whole team,” Reynolds said.
ULM coach Matt Viator said he felt it was a close game and his team played well given their circumstances against a tough Memphis team that his team had a shot at beating.
“Our kids played hard, I think they have a really good team,” Viator said. “It is disappointing at this point for the players, I thought we played really well and it’s kind of frustrating.”
Even with the injuries, ULM was still plagued with missed opportunities in the first quarter and later a fourth quarter breakdown.
Senior quarterback Caleb Evan’s touchdown run in the first quarter was called off due to a flag. A field goal by sophomore kicker Jared Porter was the only contribution to the Warhawks’ scoreboard that quarter. Evans only managed to complete five out of 11 attempted passes in the first quarter. They converted once on third down out of five attempts that quarter. As has become accustom, the team improved for the second quarter and beyond.
After another Tigers’ touchdown the Warhawks finally landed in the endzone courtesy of a seven-yard run in by Evans. He would finish his game with two touchdowns, passing for a total of 286-yards and rushing for 112-yards. While his throwing has been consistent this season, Evans displayed another side of himself in rushing against the Tigers.
“I told Josh second half they might switch it up because I’m running on them so good with the one-on-one situation with the safety,” Evans said.
Junior tight end Josh Pederson also scored early. His six-yard catch in the endzone marked his fourth consecutive game with a touchdown. He ended the night with two touchdowns.
Junior running back Josh Johnson rushed for 119-yards. The only blemish on his personal stats was that he was stopped for a loss of yards for the first time this season.
Going into the fourth quarter the Warhawks were down by 13. After scoring, the score was 33-39 before the defense fell and Memphis scored twice late in the fourth to end the game.
The Warhawks next play on the road against Sun Belt Conference opponent Texas State. Kickoff for that game is set for 8:15 p.m.