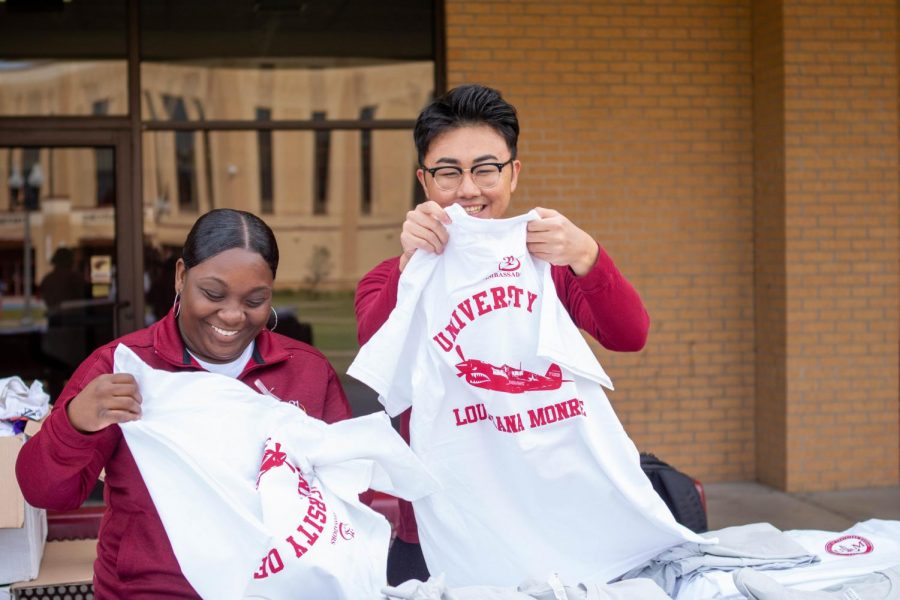 Employees at Rolling Hills Ministries Thrift Store knew business was booming, but they couldn’t figure out why. T-shirts were flying off the racks. They later found out the shirts had a greater purpose in life.
The shirts being sold at the thrift store were college shirts but not ULM’s. Shoppers were buying shirts from other universities and then turning around to campus to trade them in for new ULM shirts.
It was 31 Ambassadors T-shirt Swap which is a day to spread school spirit and give back. Cameron Tingle, the 31 Ambassadors president, said this event helps rid the campus of other school’s merchandise.
Tingle himself shops at thrift stores to find shirts every time his organization hosts a t-shirt swap.
“I’m not going to have new university shirts every semester to trade in. It’s good for the thrift store, it’s good for us and it’s just a good time,” Tingle said.
While designing this year’s shirt, he and his organization decided that the shirts given to them would be donated to victims of Hurricane Barry, a tropical cyclone that made landfall in Louisiana in July.
The purpose of the event is to give people wearing other universities’ shirts an incentive to let go of those items.
They accept trade-ins from students, faculty and even staff that want to get rid of their non-ULM t-shirts.
Students wanting new ULM shirts on a budget found a way to get them, although, for a small fee. Thrift stores in the area like Rolling Hills experienced a sudden surge in sales from college students looking for shirts to trade in.
Denisha Jackson, a junior psychology major and 31 Ambassadors member, said she believes people on campus have the freedom to wear what they want, but seeing more ULM shirts on campus does help with school pride.
“If they’re going to the thrift store to get those one or two dollar t-shirts, we’re going to further more make those useful by giving them to people in need,” Jackson said.
For Jaylon Naron, a junior kinesiology major, it doesn’t make sense seeing people at a university representing another school they don’t attend.
He took advantage of the t-shirt swap and got a new shirt that represents his university.
“I had a shirt representing somewhere else that I’m not at so it kind of didn’t make sense so I traded it in for a shirt that represents where I’m at, who I’m around every day and who I get to be around,” Naron said.