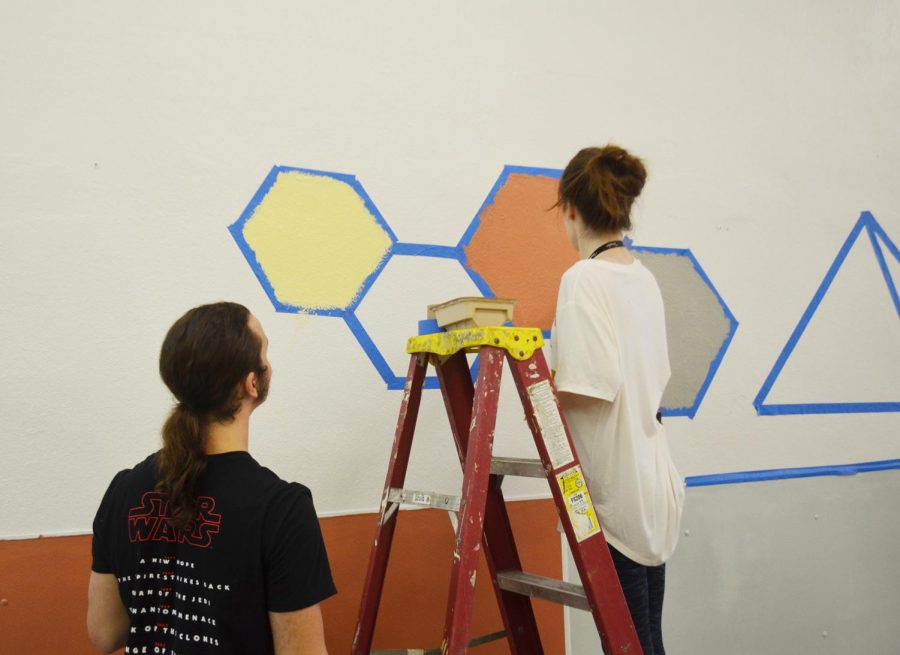 The sound of laughter and the smell of paint filled the DeSiard Street Homeless Shelter last Saturday as volunteers gave the drab building a fresh, new look. Walls that were previously plain are now covered in fun designs and interesting colors thanks to a pair of ULM students who organized Poses and Painting for a Purpose.
One of the students, Mary Hillman, had always been passionate about helping her community, but she felt like she could do more. Specifically, she wanted to help the homeless population of Monroe.
Hillman decided to contact Asja Jordan who runs a fitness business, Potential 2 Kinetic, and shared her interest in community outreach.
Then, the duo met with the director of the DeSiard Street Homeless Shelter to ask about the shelter’s needs.
“He mentioned something about new paint and the idea just came together,” Jordan said. “We wanted to combine yoga from P2K with the painting.”
Before heading to the shelter, volunteers could meet with Jordan to participate in a yoga class. However, when Jordan and the volunteers arrived to the facility where they hoped to have the class, they were locked out.
“We experienced something similar to what the homeless experience all the time,” Jordan said. “Nowhere to go. Doors are locked. What do we do now?”
Luckily, one of the participants owned a yoga studio and allowed the class to be moved there. Despite the mix-up, the class was a success.
Hillman was enthused to see the community support her idea and participate in the event.
“We are just so grateful that the community wanted to reach out and make a difference in that way,” Hillman said.
Poses and Painting for a Purpose appealed to many people. One organization that took a liking to Hillman and Jordan’s collaboration was Ambitious Women’s Society.
AWS members got their hands covered in paint as they helped make the DeSiard Street Homeless Shelter a more-welcoming space.
“I enjoyed getting my hands dirty and really making a difference you can see,” said Carly-Marie Herrera, an AWS member.
Another AWS member, Myra Edwards, said that community service helps her grow as an individual and become involved in the community.
Many businesses sponsored Poses and Painting for a Purpose. Without their contributions, the event would not be possible as they provided the paint. The sponsors include: Lowe’s, Sherwin-Williams, Mer Rouge Wholesales, Ouachita Green and Cummins & Fitts.