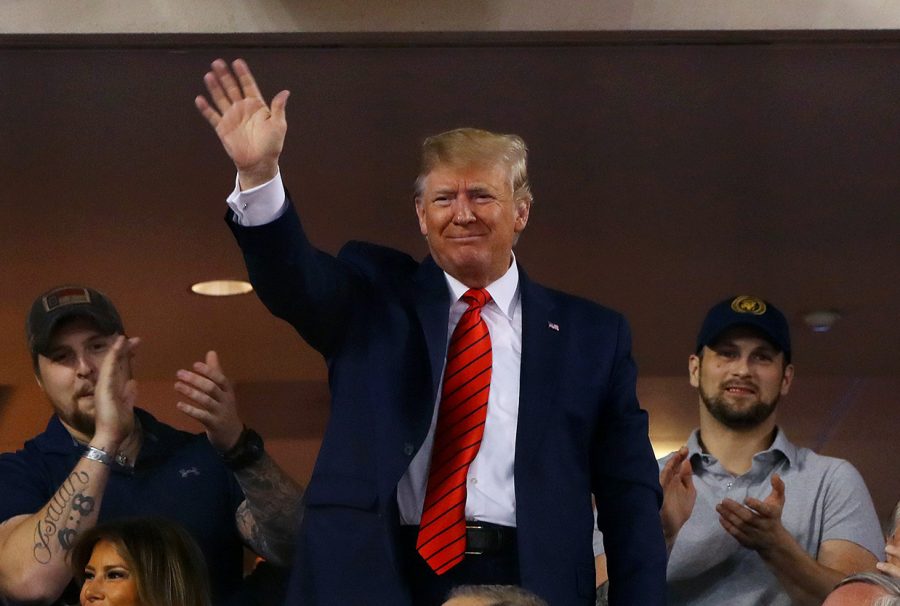 U.S. President Donald Trump acknowledges the crowd during Game 5 of the 2019 World Series between the Houston Astros and the Washington Nationals on Sunday, Oct. 27, 2019 at Nationals Park in Washington, D.C. (Alex Trautwig/MLB Photos via Getty Images/TNS)

The Trump campaign announced that President Trump will host a Keep America Great rally on Wednesday, Nov. 6 at 7 p.m. at the Monroe Civic Center.
The president is expected to campaign for Republican gubernatorial candidate Eddie Rispone.
In a statement released by Rispone, in response to Trump’s visit, he expects Trump’s presence to align Abraham voters to his side.
Monroe Mayor Jamie Mayo said he’ll be welcoming President Donald Trump when he visits the city next week. It’ll be the first time a sitting president has visited Monroe since the Ronald Reagan administration.
Mayo says he’s excited for the president and his supporters to see what the city has to offer. The city expects traffic from people coming to see the president give the city an economic boost.
The mayor believes having a sitting president visit could help put Monroe on the radar as a political player.
The campaign is to be held at the Monroe Civic Center. The doors open at 4 p.m. for general admission. One can register to attend at the Trump’s campaign website. The ticket is given on a first-come- first-serve basis.