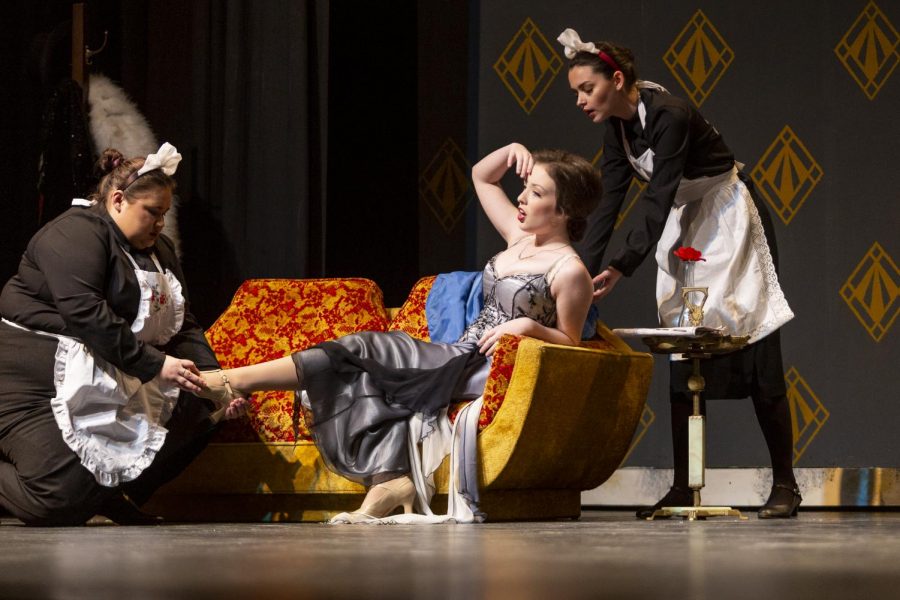 The curtain closed, a shot rang out and the crowd gasped in shock. Madame Flora was dead. That’s how Morgan Rowland, a senior, finished her final performance ever at ULM. She really did go out with a bang.
The speech-language pathology major played the part of Madame Flora in “The Medium,” one of the two shows performed every night in Spyker Theatre from Oct. 30 through Nov. 2.
“I’ve never been challenged this hard, and I’ve never played a role this hard,” Rowland said. She has been in nine productions at ULM, and says she is proud of her last performance in the dramatic opera.
Best of all, the audience loved it. One attendee was Brenda Rhodes, a woman whose granddaughter is a student here.
Her granddaughter was required to attend the show for a music class assignment, but she said that she just tagged along for fun. She loves opera and according to her, everything about the first show was exceptionally executed from the music to the acting.
The second show, “Amelia Goes to the Ball,” was also an opera, but was funnier and more upbeat. Playing the title character was Morgan Rae Meyer, a senior. She has been in seven ULM productions and will be performing in one more, “Jekyll and Hyde,” in the spring. Meyer said that the preparation for the show was difficult, but it was rewarding in the end.
“It was worth it,” the vocal performance major said. “I like making the audience laugh.”
And indeed, she did. The audience was hysterical with laughter from beginning to end, thanks to Meyer and the rest of the cast.
However, none of it would have been possible if not for the director of production, Dr. Mark Clark, who has been putting on shows at ULM twice a year for the past 12 years.
Because the plays were put on during Halloween, he wanted to make the production spooky. That’s why he chose “The Medium,” because it deals with ghosts and spirits. He also chose to do the show in Spyker Theatre instead of Brown Auditorium because he says it has a more haunted house feel to it.
When directing is concerned though, he says that it can be difficult especially when there are two different casts.
“All you can do is set the table and hope that they come and eat it up,” he said. “And they really did.”
He said that there was a great chemistry among the actors which helped the shows to be as wonderful as they were.